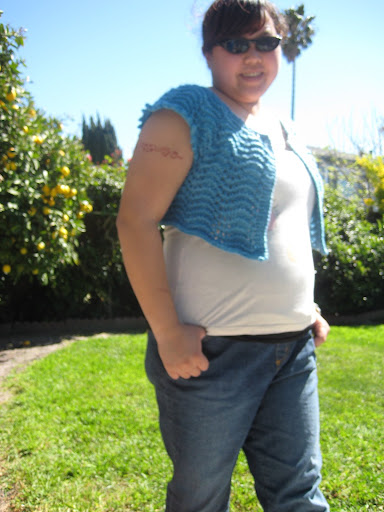 I started this one in early March, and even though I didn't finish it until today, this is actually a REALLY quick knit. (It's just that, as usual, I took big breaks in between to finish/start other things.)

It's double-stranded Malabrigo Silky Merino in Bobby Blue. Can I just say that Malabrigo might be my favorite yarn ever????? It's lovely to knit with and lovely to wear. I almost feel bad using it on a spring sweater because (obviously) you don't want a lot of material on your skin in hot weather, and Malabrigo is the sort of yarn you want on your skin as much as possible!

I decided to do cap sleeves with a picot bind-off. I had originally intended to make this a full-length sweater (like, down to my hips), but I thought about the above fact that I would be wearing this in warm weather, and also, it might look funny with my huge belly sticking out between the fabric. So I made it short. I used almost exactly 4 skeins. I had intended to do a picot bind-off on the bottom edge as well, but it wasn't long before I saw that I would not have enough yarn to make it all the way to the end of the sweater (and who wants to start a new skein of yarn just for the bind-off?), so I just did a regular knit bind-off, as loosely as I could to keep the wavy drape of the stitch pattern.

Overall, I'm REALLY pleased with this sweater and pattern, and will definitely make this again at some point. It's really pretty and really easy. Next time I might try a different version (long sleeves or something).