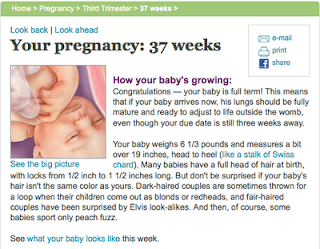 This is how far along I would have been today, had Jolie not come early. So I guess that makes her full-term today, kind of.

Jolie will be ONE MONTH OLD next Wednesday, and I can't believe it. The hours have gone by slowly, but the weeks have flown by, if that makes any sense. I can't believe how much she's changed in such a short period of time.

Jolie at 9 days, two days before we left the hospital:

In Asian culture, the first month birthday is a big deal - instead of having a baby shower before the baby is born, Asians (traditionally) have a huge one-month birthday party. I guess if the baby survives the first month, then it means she'll make it for sure, and it's cause for a huge celebration.

That first week and a half in the hospital was just hell for me, with some rude nurses (there were some nice ones too, though) stressing me out about every little thing and making me feel incompetent just because Jolie would conk out when I would feed her, and it made her lose a little weight. I still maintain that they bullied me into rooming with her not to help me "feel more comfortable" being alone with my baby, but so they could test me and evaluate me and judge me about whether or not I was a fit enough mother to take my baby home. Yes, Jolie's a preemie, but still, I doubt the labor and delivery staff are so judgmental of mothers of full-term newborns. They really put me through the wringer those first 10 days, and I would leave the hospital crying and angry and sad because all I wanted was to have my baby at home with me.

And then we finally took her home, and it was an adjustment, introducing her to the rups (who are okay with her, but still keep their distance because they're not entirely sure what she is yet) and getting her feeding schedule established, and then I was stressing out a lot about breastfeeding. See, I really want to breastfeed my baby, but at the moment, the disparity in our sizes makes us slightly incompatible, anatomically. And the way it works is that I can't just wait until she's big enough - believe it or not, breastfeeding is a skill that both baby and mother need to practice to get it right. So I've been trying to BF her a little bit, in between all the pumping I've had to do, and I would cry because I was angry and sad that there was something wrong with me that I couldn't BF my own child, and I HATED pumping because it was painful and uncomfortable, and then I hated myself for even considering switching completely to formula, knowing all of the benefits of breastmilk, especially since she's a preemie. (At this point, you should be feeling sorry for Jimmy, because I have NOT been pleasant to be around.)

But my mantra of "one more day!" has gotten me through it - I've been BFing Jolie here and there, and she's successful some of the time, and pumping hasn't been as painful anymore because I think my body is adjusting, and while I still despise the tedium of the schedule and sitting at my desk hooked up to a machine, I now feel like it's manageable. I still hate it, but I no longer feel like I can't do it.

And Jolie herself is changing too. She was so incredibly tiny when we brought her home, and she still is, but she's grown two inches since birth, and she's now 6 pounds. Her double chin is adorably chubby, and she's been staying awake longer after feedings. I just KNOW we're going to hit that "crying constantly" stage soon, because she's becoming more fussy lately and she needs to be held more. We love playing with her, giving her baths, and basically looking at her all the time. Between Jolie and our X-Files binge, we're definitely not bored.

Her grandparents (on both sides) are over all the time, or asking us to bring her over, because they adore her, and I don't blame them. She is pretty damn adorable.

So there are three weeks left until my due date, and considering how much has happened in the last three weeks, I can't even imagine what leaps and bounds she will achieve by the time she reaches September 17th. And then we can start looking for all the regular milestones, like turning over, sitting up, and recognizing faces. Jimmy and I are both excited for the day she can laugh and play with us, but we're also not in THAT much of a hurry to see her grow up, because we want to cherish this time with her while it's still going on. She won't be a baby forever, and I don't want to take this for granted.