The weather was nice, the Giants beat the Phillies, and I gave birth.

When I said I was sick of being pregnant and I was SO READY to have this baby and get it out of me, I really didn't think you'd take me seriously. This really wasn't what I had in mind.

PS - But since you did decide to listen to me this time, I have to thank you profusely for making this as easy and fast as it was.


To say it was a weird day for me yesterday doesn't even BEGIN to cover it.

It really started early in the morning. I woke up as early as 2am feeling some pain in my hips. This didn't alarm me, because ever since growing really huge, I get hip pain when I sleep (especially if I don't have a support pillow between my knees, which I didn't that night), and so I tried to reposition myself and then went back to sleep. I woke up feeling the same (but slightly worse) around 4am, and by 5:30am, it was no longer just hip pain but really intense downward pressure, and so I gave up on trying to sleep and just woke up.

By 8 or 9am, the pressure was getting worse, and coming sporadically. I was worried, but was trying to stay calm, because believe it or not, I was having a baby shower that morning - Jimmy's sister Laura was throwing me a baby shower in Willow Glen, and what kind of person calls in sick to their own baby shower? In addition to the pressure and pain, I noticed some mucous, but it wasn't bloody, so I wasn't really sure what to think. I vowed to call the hospital after I got home from the shower if things got worse. (The shower, by the way, was awesome and lovely, and I only wish I wasn't feeling so much physical discomfort throughout the whole thing.)

Things didn't get worse, but they definitely didn't get better, so when I got home, I called Labor and Delivery, and they said it didn't sound like I was in labor, so maybe I should just rest and hydrate, and if anything got worse, then I should come in. After a very short, rather painful and uncomfortable nap, I noticed that things DID get worse - I was bleeding now. The pain and pressure were stronger as well. I grabbed my purse and ID and whatever paperwork I had that my doctor's office had given me, and Jimmy and I headed to the hospital so they could examine me and see if what was wrong.

In the car, the pain was... manageable. By the time we walked all the way up to L&D, it was getting really bad, and I was bracing myself against the wall to manage it. At this point, I was starting to believe that I was having contractions, but I still wasn't thinking that I would be having the baby - I read that at this point (33 weeks), the doctors will give women fluids and monitor them and basically try to hold off labor. I pretty much thought that was what was going to happen.

So, we arrive sometime between 4:15 and 4:30pm... we had to sit in the frickin' waiting room until WELL after 6 o'clock! And every few minutes or so, I would have a really strong contraction. They were getting more and more painful, and closer together, but since all the rooms were full (SUPPOSEDLY!), there was nothing they could do for me, and so I had to suffer the indignity of going through all of this in front of about five other families, screaming kids, and people eating French fries. I was on the verge of tears, whimpering into Jimmy's shoulder, and gripping his hand until it turned white. I was begging him to go harass the receptionist, tell them that THIS WAS NO JOKE and that I needed help desperately. And every time he went, they would just tell him, "10 more minutes, okay?" Well, if you did the math, that "10 more minutes" turned into over an hour and a half. I was ALREADY in bad pain when I got there, and by the end of it, my body was literally trying to push. I was fighting it as much as I could, but I was in so much pain and scared to death.

They FINALLY took me in to an observation room, and I finally felt free to yell and moan and be as loud as I wanted to because I was experiencing so much pain and SO much pressure, and without forty people looking at me, I could finally deal with it. You have to understand, I'm not scheduled to take the "Preparing for Childbirth" class for two more weeks, so I had no idea how to manage all this pain other than to try to breathe, but it's really hard to remember things like that when you're scared to death. And I still wasn't even thinking that I was going to deliver a baby - I was scared to death that it was something ELSE, a complication, something that would endanger Jolie's life or mine. So I was panicking.

So how surprised was I when the doctor came in to examine me and said, "You're fully dilated and the baby is RIGHT THERE, so we're going to wheel you to the delivery room, and there's going to be a birthday today!"

And how surprised was I when I asked the nurse, "Is there going to be time for pain medication?" And she said, "NOPE! But she's small enough that she should just come right out!" And then I was scared.

No time for an epidural, no time for an IV. They wheeled me to a new room, moved me onto a delivery bed, propped me up, and finally let me push. And less than 20 minutes from the time I was brought in and the doctor examined me, out came a Jolie: 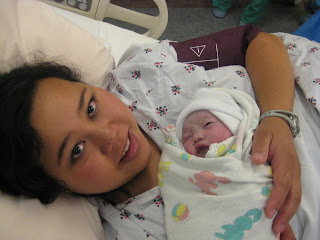 When I first heard her cry, I started to cry too (this is where I give props to Urban Decay Primer Potion), and it all happened so fast that it felt surreal. I'm STILL not sure that what happened really happened. I was afraid I'd wake up this morning and it would all just be a dream.

Other than the nightmare of the waiting room, it was the easiest possible delivery anyone could have possibly asked for. And what's more, Jolie is HEALTHY. Other than being early (and therefore small), she's absolutely fine - she was breathing fine on her own (no machinery), her muscle tone was great, she was regulating her body temperature fine... no complications. And as I found out this morning when I visited her, she was feeding fine as well. She still has to stay in the NICU for a couple weeks so they can monitor her functions and make sure she can do everything she needs to do, but she's just perfect. 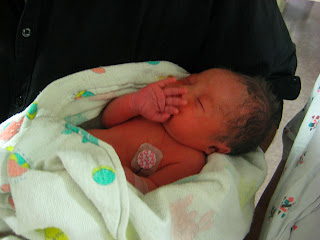 So how often does it happen that someone goes into labor at 33 1/2 weeks totally spontaneously (they have NO idea how or why...), pops out a perfectly healthy baby, and then is perfectly mobile a couple hours later? I have no idea, but it happened to me.

They allowed me to go home a day early, and I chose to because I was going stir crazy at the hospital, and I need to sleep in my own bed anyway, and take care of getting things ready for Jolie. Today I woke up really early, had breakfast, and then waited for Jimmy so we could both go see Jolie together. She looked good last night, and she looked even better this morning. Our little Jolie is such a rock star!

So, I was sad today when I went home, because I never thought I would be leaving the hospital without my baby, and I cried on the way home, but I know it won't be long before we can take her home. In the meantime, I plan to see her every day and hopefully soon, you all will get to see her too.


So, please extend my daughter a warm welcome to the world. Jolie Estelle Fuqua has arrived.