The pattern is Sylvi, by Mari Muinonen, from Twist Collective's Winter 2009 issue. I used about 11 and a half skeins of Berroco Comfort Chunky in Dusty Teal on size 11 needles.

Since I was pregnant when I started, and I had no idea what size I would be by the time it was all over, I just decided to go large, since it's supposed to be a sweater coat anyway, and I wanted to be able to wear layers under it without feeling like a sausage. I'm swimming in it now, of course - it would've buttoned on me at my largest, so it's robe-like now. But so cozy and comfortable.

It's funny, when I first printed out the pattern to work on, the charts had me shaking in the knees. They're literally quite intimidating and scary-looking. But if you take it one row at a time, pay REALLY close attention (like, literally count stitches), and keep the symbol guide handy, it's not too bad. You get the hang of it after a while. Plus, it really helped me to use stitch markers to section off the wide stretches of seed stitch, so instead of counting knit-purl-knit-purl, I would just be like, "seed stitch to this marker, then follow the chart until this marker, then seed stitch until the end," and that helped TREMENDOUSLY. The only confusing part was that there were some errors between rows 141 through 152 in terms of the decreasing. I eventually figured it out, but I hope they someday add that to the pattern's errata.

The seaming was on the outside, since I guess that breaks up the monotony of the seed stitch, and I used the crochet method to seam instead of mattress stitch, so the seams look kinda cool, and there are some "holds" at the raglan seams from the crochet pulling, but it looks purposeful :)

The flower petals were casted on and knit completely separately, instead of picking up stitches where they told me to. It was SO much easier that way, because I can't imagine all the turning at the ends of rows with each petal attached to the big huge garment. I just made sure to leave tails from the cast on and bind offs that were long enough to be used to sew the petals - the fewer loose ends, the better. Of course, it's not like I really weaved away any. They're just hanging around. I tied lots of knots because I hate the weaving part - I only do it for the ones that would be REALLY visible. (For myself, at least. For gifts, I always try to make it look professional.)

So... that's that :) I don't have any closures on it, but I will try to find some, and then make button loops. Or maybe some clasps. Or maybe I won't use anything at all, and it can just hang there.

I'm so proud of it and of myself! This is my MOST ambitious project to date. I usually go for quick, easy projects because I like finishing things and watch my list of FO's growing, but this time, I went for something that I knew would be a long-term project, I stuck to it almost to a T (didn't try to take any short cuts), and it turned out beautifully. I will treasure this so much. It is definitely my benchmark project as a knitter. 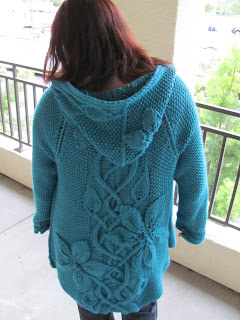 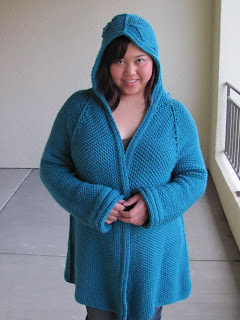 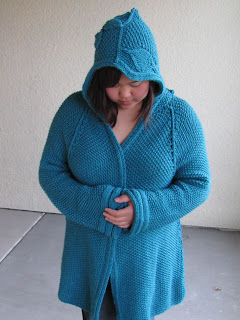 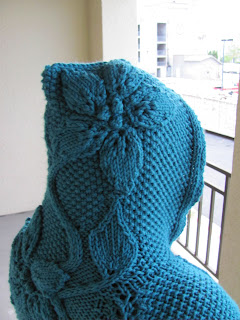 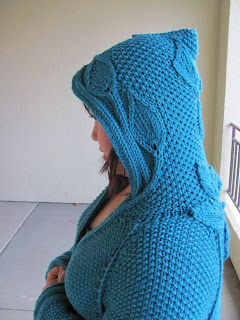 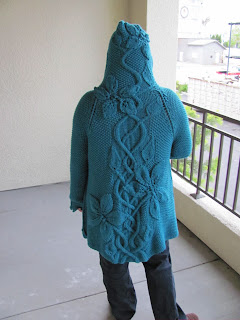 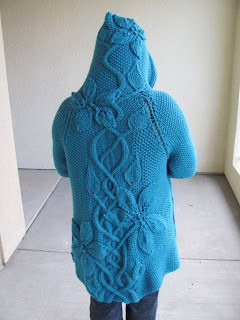