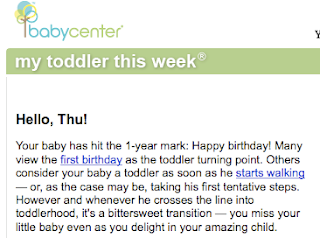 Today is Jolie's first birthday. I can't believe how she's grown! At this time last year, I was experiencing extreme discomfort as I was getting ready for my baby shower, and a year later, I've got this little girl trying to chew on a remote control behind me right there.

I've been remembering/re-living all those early days lately, as Jolie's birthday has been approaching, and I still get emotional. I remember the delivery, the uncertainty, the quickness of the whole thing. I remember seeing her for the first time, tears streaming down my face. I remember being discharged from the hospital, and the volunteer wheeling me past the entrance to the NICU, and it hit me that I was leaving my baby behind at the hospital. I remember visiting every day, twice a day, and crying every time I left without her. I remember when the hospital finally succeeded in bullying us into doing a "trial night" in the family room - I hated being cooped up in there, but I was there with Jolie and my laptop and then we ALL finally got to go home the next morning.

Since then... well, I wouldn't say it's been a piece of cake, but actually, Jolie has been a remarkably easy baby. She was too little to cry needlessly, and by the time she was old enough to do so, she had already grown out of the colicky age. She was never picky about anything she ate, from the temperature of her bottle to the solid foods when we finally started. She hardly ever lets me be in the room with her without making me hold her, but at the same time, when we're at a crowded family party or out in public, she is totally unafraid - at worst she would just stare, wide-eyed, taking in the scene, and at best, she would make eyes at everyone and smile at them. She's never been sick (*knock on wood!*) other than a sniffly nose or some gas. Sure, she gets cranky sometimes now (usually when she's tired or hungry or getting her diaper changed), but she is seriously one of the happiest babies I've ever seen, and I'm not the only one who says that.

And she's such a charmer - the girl can't even talk yet, but she loves to joke around with you, get a laugh out of you. She'll coax you to let her have her way by kissing you, or she'll try to get some attention by fake-coughing, or she'll amuse herself by scaring the living daylights out of you. She sings softly along with you when you sing, and waves her arms to the music.

The first year has been both magical and bittersweet, because I knew that at some point, the first year would have to end, and now we will be beginning our second, and so on, and so forth. The baby years will draw to a close in not too long, so I'm trying to enjoy this while it lasts.

Happy birthday, Jolie! You are such a wonderful baby, and it will be exciting to see you as a wonderful toddler!