Month of Blog, Day 19: A talent of yours 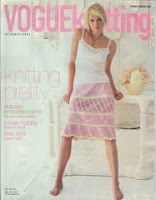 Knitting, also a hobby of mine (that's tomorrow's blog topic), has developed into a talent.

I first learned to crochet years ago, but really started tackling it in the spring of 2006, as a stress reliever when I started teaching. A few months later, I decided I wanted to learn how to knit as well, after spotting this issue of Vogue Knitting (at right) on the newstand and falling in love with the skirt on the cover. It was my dream project, and I vowed to make the skirt one day.

It took me months alone to get the motions down. Most people don't realize this, but knitting and crochet are opposite in terms of how they work. With crochet (which involves one hook), there are a few different stitches you have to memorize how to do (single crochet, double crochet, triple crochet, half double crochet, etc), but the motions are pretty much all the same - hook the yarn, pull through. With knitting (which involves two needles), there are only two stitches you really need to know - knit and purl - but the motions to do each stitch might seem complicated if you're totally new. Crochet involves working with one loop at a time, while knitting involves many loops at a time. 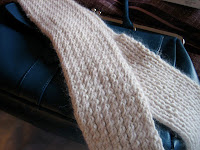 But eventually, I got it, especially with the help of one of my coworkers. And then I took off, and never looked back. I started off with scarves, like most people do, but I was quickly bored - who wants to do the same thing for 60 inches? Seriously! I got into knitting because so many of the garments I saw were beautiful - the pullovers and cardigans and skirts and hats - they were unlike anything I was seeing in stores. (And the ones I did see in stores were outrageously expensive - check out Anthropologie in the winter time!) 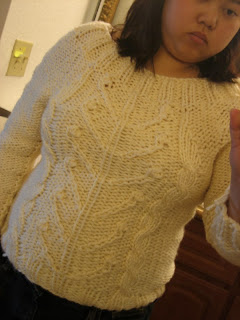 So, I moved on to sweaters. I purposely chose projects that forced me to learn new skills. A sweater like the one at right, the Twinkle Tunic, scared the crap out of me when I looked at the instructions, because it had three different cable motifs running at the same time, plus bobbles, plus it was bottom-up. I learned how to duplicate stitch, how to (finally!) sew seams together. I did lace knitting. I learned how to make gloves with actual fingers. I learned short-row shaping. I did some basic fair isle. (That's one I still need to improve.) I learned how to modify and pick up stitches and properly substitute yarn. I learned different types of cast-ons and bind-offs. I finally got around to blocking items this summer :) I learned to make buttonholes (and actually sew buttons). I've made adult clothes and baby clothes and baby blankets and purses and scarves and hats and gloves. (Still haven't made socks though.) I've crocheted a cupcake and I've knitted pasties. I've tried to learn as much as I can, and I know I still have more to learn, but considering how I've really only been knitting since the tail end of 2006, I think I've accomplished a lot in the short time that I have been knitting.

My proudest accomplishment is my Sylvi sweater - it took me a full year, not because it was too hard, but the boring stretches were just too boring. And also, I was interrupted by the birth of my child :) It was a long, laborious project, but I'm so happy I decided to do it, because it truly is the most beautiful thing I've ever made: 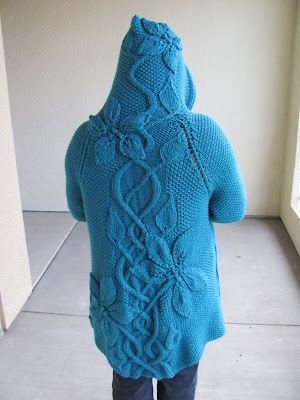 Yes, I would call knitting a talent of mine. It's something I'm good at (keeping in mind that a big part of being good at knitting requires patience, dexterity, and the ability to follow instructions). There are lots of knitters who are better than me, I know that, but there are also a lot of knitters who might not ever attempt their own Sylvi either. So yes, knitting has become a talent :)