August 04, 2010
(I have so much fun writing these blogs that I might just knock out a few of them in succession, without waiting until the next day! This is fun! Thanks, Adrienne!) 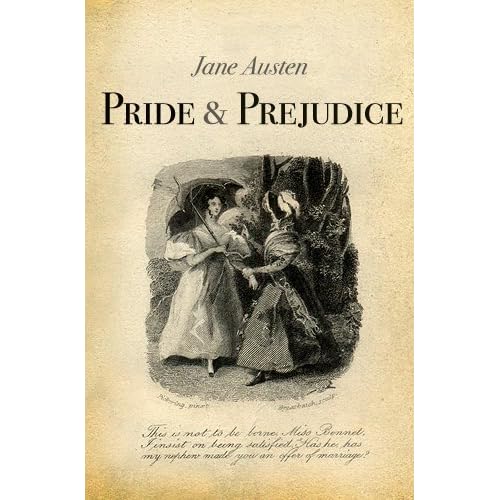 I will be the first to admit that it is very easy to choose P&P as my favorite book. It's a very popular book, and has spawned about a gazillion different spin-offs (my favorite being the British series, "Lost in Austen") and movie adaptations (nothing beats the Colin Firth one, by the way!), and there are just legions of girls and women alike who are swooning for their own Mr. Darcy.

Yes, I acknowledge the "chick lit" and "romance" aspects of the novel, because there's no getting around that. It's a good love story, and women just LOVE the period costumes and the proper language and dainty teacups and embroidered cushions and stuff like that.

But it's too easy to reduce P&P to just a love story. To do so is to completely detract from Austen's talent as a writer and observer of human nature. Any idiot can put together a captivating romance. Yes, Austen wrote period love stories, but embedded in these love stories is social commentary - about the military, the economy, the role of women, the role of men, the importance of literacy and exercise, fashion, society, familial relations, etc - and it's written in sharp, witty, intelligent prose. Austen's use of the English language is absolutely perfect. I know that Austen's novels have been fodder for insipid rom-coms, and people who've never really studied her would like to think of her novels as being shallow romance, but that could not be further from the truth.

P&P is perhaps Austen's most beloved novel, because Elizabeth Bennet is spunky and independent and playful. (BTW, people like to think of Elizabeth as a modern girl, but she really wasn't. She was very much a believer in the rules of propriety and she stays firmly in-bounds.) She challenges Mr. Darcy, she steps up to him, and he falls in love with her for it, and eventually they get married, yay.

Okay, but also take a look at the importance of marriage in a society like that - marriage was pretty much a girl's only option. And in a family like the Bennets, where there are only girls and none of them can inherit the family home, it becomes a necessity to marry a guy who can support you. Elizabeth faces the problem of whether she should marry for comfort or marry for love (and luckily for her, that actually no longer is a problem by the end of the book). Look at the other marriages in the novel for contrast - there needs to be a balance of love (passion), respect, and financial security for a happy marriage in Austenland, and the marriages that lack any of those components are not painted favorably.

People like to think of P&P as being chick-lit, and yes the heroines are female, but you shouldn't overlook her characterization of men. Austen wasn't a feminist who believed that men and women should have equal power. (In fact, Lydia, who makes her own sexual choices in the novel and in that sense actually behaves more like a modern woman than Elizabeth, is totally hated.) In P&P, it's when men fail to fulfill their given roles that things fall apart. Take Mr. Bennet, for example. He's a lousy father and authority figure. Yes, we love him because he's funny and he makes fun of his wife and younger daughters who are all idiots, but objectively, he's not doing a good job of making good decisions on behalf of his household. Take Mr. Collins, who is an obsequious little monkey to his patron, Lady Catherine De Bourgh. Even take Mr. Bingley, who easily influenced by Mr. Darcy and his two sisters in regards to marrying Jane Bennet! Austen seems to be saying, "Hey! If you want to be in charge of us wimmins, then stand up and be men, goddammit! Stop effing up!" (Okay, she would NOT use that kind of language. But you get my point.)

There are so many layers to peel away with P&P, and every time I re-read it, I pick up on new things. Yes, at the end of the day, my heart flutters when Mr. Darcy says "You must allow me to tell you how ardently I admire and love you," (yes I typed that from memory) but it isn't JUST that. It's also all the intellectual English-major stuff that's in there too. And that's why it's my favorite book. It's beloved by both trashy romance novel readers and snobby Ivy League scholars alike, by both men and women alike. Austen is one of the most treasured British authors of all time for a reason.

And by the way, here's my Master's thesis.