December 31, 2010
My friends decided to throw a Noon Year's Eve brunch (since one of them has to work at 4:30am tomorrow), so of course, fancy dress and mimosas were a must. I decided to wear my black sparrows dress that I wore to chaperone junior prom last spring, and decided to coordinate my eyes.

My eye look is inspired by Urban Decay's BOS III look, but I definitely needed to adapt it to my eye shape, because my crease is not as high or deep as the model's. So this is what I came up with: 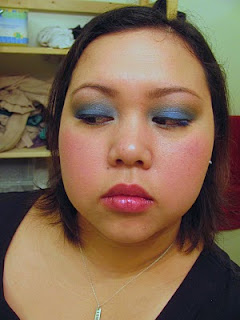 Here's how I did it:

- Full face of makeup this time - I used Stila's One-Step primer/corrector (which I will have to use further before I review it) underneath my Stila One-Step makeup. I used UD's 24/7 concealer stick on my undereyes.

- MAC Dazzle in Snazzy, sans lip liner because it was just too dark that way. By itself was fine:
On the eyes:
- UD's Primer Potion (original), all over the lid
- Eyeshadow in Radium blended to just above my crease: 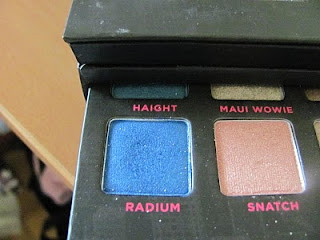 Radium is this gorgeous, piercing blue, similar to the Radium liquid liner that they used to make back in the day. (It was a STAPLE for me my senior year of high school, ten years ago!!!) This shade is exclusive to the new Book of Shadows Vol. III: 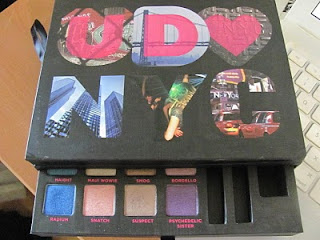 I really recommend this palette! It's limited edition, but still widely available (at least, online) as far as I know, unlike the Naked palette. I own every BOS, and I love each one.

- Now, the UD look I linked to above uses Perversion, which is in the BOS. I wanted a less severe dark shade, so I went with Gunmetal, which is available as a single, as well as in the Vegan Palette and Naked Palette. It's a dark shimmery gray.

- I used my usual crease combination: Matte Eyeshadow in Naked blended into the Gunmetal and slightly upwards, and then Foxy to blend Naked and highlight the brow.

- I dabbed just a teensy bit of Eyeshadow in Uzi (bright white with silver glitter) into the inner corner, on the tear duct. Uzi is also included in BOS III, as a single, and probably in other palettes as well.

- I did a thick stroke of 24/7 Eye Pencil in Gunmetal along my lower lash line. (I generally try not to use shadow on my lower lid because I never remember to put primer there, and the shadow always falls.)

- Then I did a thick line of 24/7 Eye Pencil in Zero all around my eye (thinner on my lower lid).

- I topped everything off with a light dusting of UD's Razor powder and a spritzing of All Nighter spray.

And there you have it... Happy Noon Year's Eve! 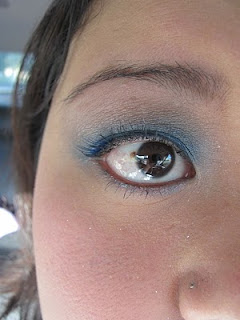 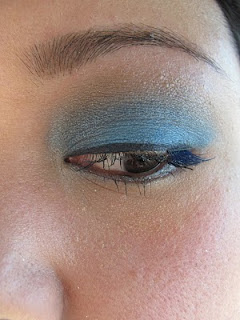