January 19, 2011
I'm home today taking care of Jolie, who's sick, so while she was napping, I took a little break from grading to get in some playtime :)

First up, I got some... well, I don't know what to call it, it's not exactly primer. I guess I'll just call it what it is: Fyrinnae's Pixie Epoxy. It's kind of like a glue for glitter eyeshadows - it holds everything on (no fallout), it gives shimmery shadows a nice foiled effect. I bought it after seeing this post from Lipglossiping,  showing what an awesome effect it has on the Black Palette shadows. I decided to do some swatching of my own: 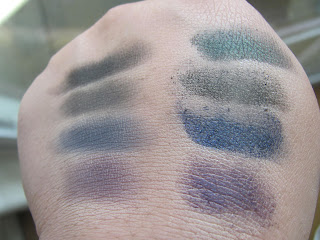 On the left, it's the shadows swatched over Eden PP by itself, on the right, on top of Pixie Epoxy (layered on top of Eden, as instructed by Fyrinnae's site). You can see there's definitely a difference - over PP alone, it's a bit murkier - they actually just look matte to me. On top of Pixie Epoxy, there's a crisp metallic quality, as there should be. And you can see more of a difference in the shades, especially between the gold-black and green-black. (I forget their names.)

And then I just decided to lay out all my UD pencils to see which ones I have: 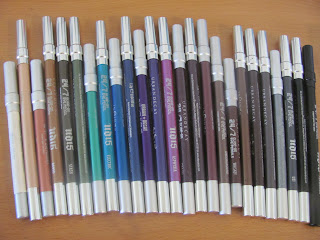 I've determined that I have EVERY single shade except for Dime and Honey (which was discontinued a little while ago, but I think I will find it on Ebay), and while I have Graffiti, Oil Slick, and El Dorado, I only have them in the teeny tiny superstash size, so I didn't have them in the photo. (They have little plastic see-through caps, and they're REALLY small, so they looked weird next to all of these.)

I have also determined that, thanks to the fact that UD includes a Zero pencil in almost every set, I have enough black eyeliner to last the next ten years. 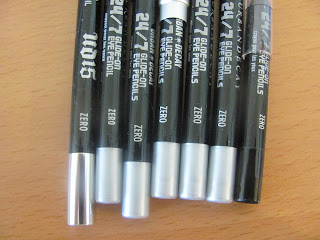 This doesn't include the aforementioned mini Oil Slick pencil and the Perversion pencil that came in the 15th Anniversary Pencil Set. It also doesn't include the two travel-sized ones that I swapped away on Makeup Alley, so if I'd kept those, I'd have even MORE black eyeliner.