January 20, 2011
Grades are done. Lessons are planned. Baby is napping. What do I do with myself? Play with my makeup!

First off, I have been obsessed with this eye makeup look since the first time I saw it, in UD's Spring 2011 preview video: 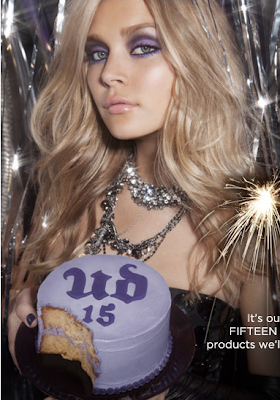 Because you KNOW how much I love purple eye looks! I figured it would be using a bunch of the new products, but when UD finally posted the face chart for this look, I was surprised at how many of the items I already had: 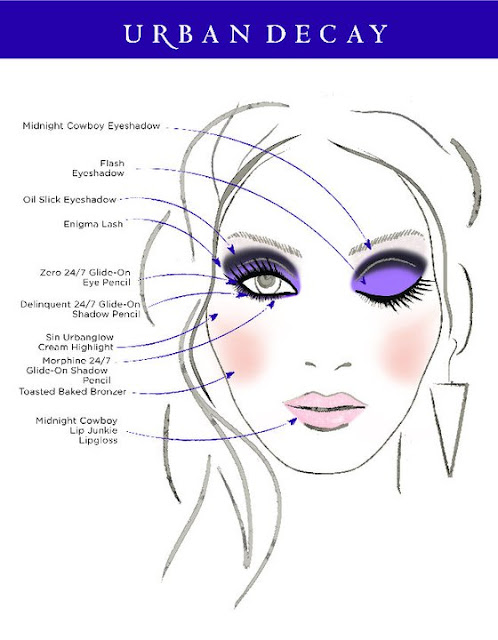 So I decided to try and do it myself, using as many of the products that I had, and duping the rest: 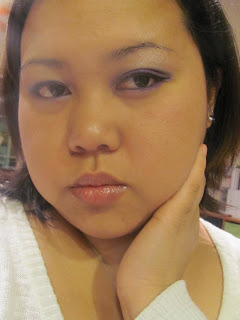 Obviously, my face is nothing like the model's, especially my eyes, so the proportions are slightly different, but I managed to do most of it. See here:


* As far as the upper lid stuff, I already had all that: Flash eyeshadow on the lid, Oil Slick into the crease (keeping in mind that my crease is much lower down than the model's), and Midnight Cowboy as a highlight. And of course, Zero eyeliner all around. No false eyelashes. I was already wearing Tarte mascara today, but refreshed it with a coating of BeneFit's BadGal Lash.

* I don't have the two purple shadow pencils (but I will someday!! When I get around to ordering them), so I used some Asphyxia eyeshadow in place of Morphine, and Psychedelic Sister eyeshadow in place of Delinquent. I know, they're not so similar, but I think it's close enough for me. If I were to do this again, I'd apply them wet, I think, to make them bolder.

* I do not have the Sin cream highlight, so I dotted some of the Sin primer potion. I think that's highlight-y enough for me :)

So, while I look nothing like the model, I still think it works. I'm happy with my handiwork. :) 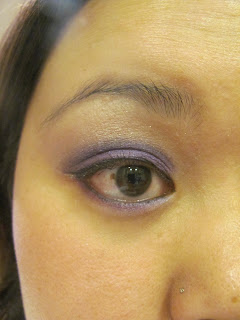 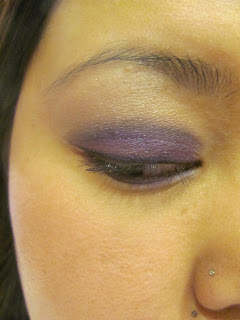 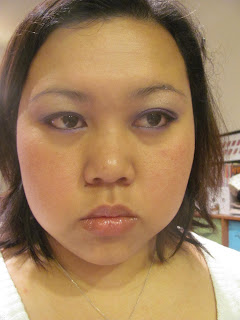 You know, I don't mind not having the model's eyes, but I sure would like some of that purple cake.

BUT THAT'S NOT ALL!

So, having read some rave reviews in a couple different places, the other night I decided to scout out Wet n Wild's Color Icon eyeshadows. (Which, of course, doesn't require much scouting because they're sold pretty much everywhere.) Supposedly for such a cheap eyeshadow, they're really smooth, blendable, and the color payoff is pretty good.

And they are! They don't swatch well with your fingertips, but when you apply with a real brush like you're supposed to, they look good. Today, I decided to try out their shadow trio called Sweet As Candy. Their trios are labeled with a brow color, a crease color, and a lid color, so they're pretty idiot-proof as long as you know your eye anatomy: 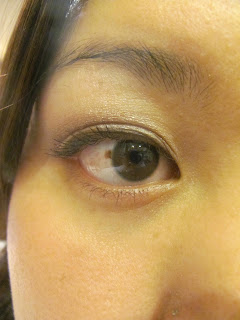 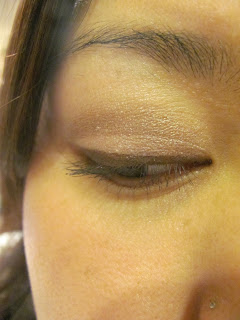 Sweet As Candy is as it sounds - a very demure trio of candy pink for the lid, mocha brown for the crease, and snowy white for the brow, all shimmery. (I added UD eyeliner in Whiskey for definition and my aforementioned Tarte's Lights, Camera, Lashes!) I also picked up WnW's Color Icon blush in Mellowed Wine - I was looking for a pressed equivalent of my favorite blush, All Smiles from Everyday Minerals. And it's great too!!!

I've picked up a few more trios/palettes, so as I try them out, I'll post some looks.

Last but not least, I decided to try out this trick for doing liquid liner - using white eyeliner to draw the cat eye. I'm using Stila's waterproof liquid eyeliner pen, and for fun, I'm wearing UD's lipstick in Jilted, which is a hot pink. (That's why I look so sad - I've been Jilted.) 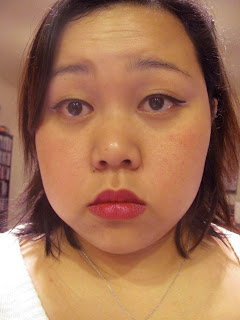