February 07, 2011
Urban Decay's new palettes (that I posted about previously) are now available on their website. 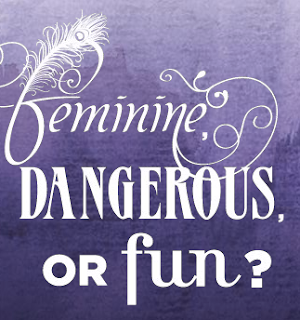 So which one are you? 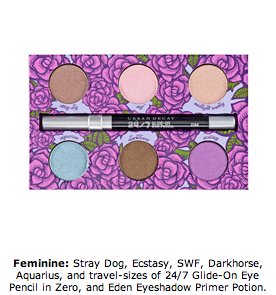 (They left out Midnight Cowboy. Probably because they know we scream at the agony of owning about five tons of that one particular eyeshadow. Still.... this one's my favorite one. Darkhorse is the only non-permanent shade in this one.) 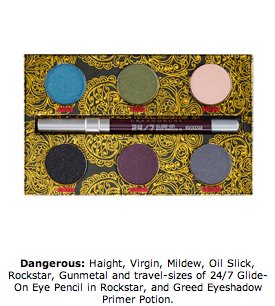 (I like this one a lot better than I thought I would, actually, especially now that I know that the bottom row is not from the Black Palette. Still... there is such a thing as TOO MUCH OIL SLICK. Virgin and Rockstar are the two non-permanent shades in this one, and they are prettttttty. Not so dangerous. The Rockstar eye pencil is one of my favorite shades to wear - can't get enough of this one. Probably because they haven't released it with EVERY single palette like the black one. And I love that you get the Greed PP. Even though Feminine is my favorite color-wise, I would most want to buy this one.) 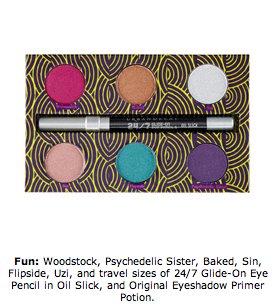 (Um... why didn't they just use all 6 colors from the Summer of Love collection? Aren't those all totally fun? All of these shades are available as singles.)

Ahem. I actually have ALL of these colors. Every single one, some of them *cough*Midnight Cowboy, Oil Slick, and Baked*cough* several times over, either as singles or from other palettes. And since I recently depotted all of my palettes to combine them into two or three giant Z-palettes, doesn't that make me feminine AND dangerous AND fun AND crafty?

(Okay, okay. I might cave and eventually acquire these because some of those shadows I wouldn't mind having more of, especially Darkhorse, Rockstar, and Virgin, which all originally showed up in palettes that are now hard to find. But they're not really a priority right now. They are nice to look at though!)

Which one are you?