Month of Blog, part 3: Day 03 - A picture of the cast from your favorite show

February 10, 2011
I had a really tough time with this one - I have lots of favorite shows, and they're all old! I only watch two shows that are currently producing new episodes, and they both are dramas that have vampires in them, by the way (The Vampire Diaries and True Blood).


The one I decided to go with for this blog post? 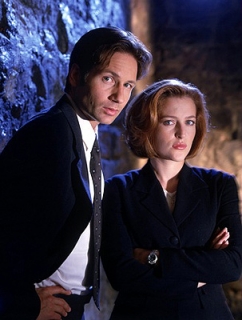 This is the show that speaks to me the most, because it's got a little of everything that I love - mystery, science, philosophy, paranormal phenomena, mythology/folklore, horror, humor... even a little romance and flirtation.

The strength of this show lies in the writing and portrayal of Mulder and Scully - they are my two perfect people. Honestly? Aside from his preoccupation with aliens to the point of endangering his own life, Mulder is totally my type of guy: smart, a little broody, witty, understated smirky sense of humor, and really passionate. He (along with Gilbert Blythe from Anne of Green Gables) is the one fictional male I would actually want to date in real life. And Scully is my HERO. She is absolutely beautiful without having to fit the "hot Maxim chick" mold, smart as all get-out, strong, brave, and totally tough.

Don't get me wrong - I like the aliens and ghosts and weird things that happen in every episode (well, not so much the aliens - that storyline was kind of overly convoluted), but with any good science fiction series, it's the way that those weird things brings out the elements of humanity that makes good science fiction good. And the humanity of the two main characters (as well as the numerous side characters in the show, whom you also have strong reactions to) is at the very heart of this series. You are watching them deal with fear and doubt, with knowledge and ignorance. You're watching them try to make sense of things that normal people shouldn't have to make sense of, grappling with the fact that continually, what they know about the world is being turned upside-down, and then grappling with the fact that almost no one will believe them. This puts the two of them in a unique position of being able to trust only each other, and so you are also seeing this relationship develop slowly over the course of nine seasons (and two movies). You like each of them individually, but you LOVE them together - I had a hard time watching episodes that featured only one or the other, because their chemistry and interaction are what MAKE the show. The human element, rendered all the more important by the non-human elements, is the best thing about The X-Files.

I didn't start watching X-Files until 2009, well after the show was over, so I had the ultra-privileged position of not having to wait in between episodes and seasons. I blitzed through Seasons 1-7 in the course of a year, and then waited a whole year before I could watch the last two, which I knew did not have much Mulder in them. (Remember? I can't handle them being split up.) Robert Patrick does a fine job stepping in, but it's just not the same. But now that I've pretty much finished the whole show and know what happens (including in the most recent movie that came out a couple years ago), I can probably relax and go back and enjoy the non-Mulder episodes of the last two seasons.

I watched so many so fast, that I can't even begin to name my favorite episodes. I have to consult an episode list here. These are the ones that I especially remember. (Not going to even try to provide summaries - just go here.)

I'm sure there are a bunch I'm leaving out - the summaries probably did not do the episodes justice. There are definitely lots of moments that are memorable, from episodes that might otherwise NOT be memorable, that I am not thinking of.

As you can tell, I really loved seasons 5-7 the best, not coincidentally the seasons where they started filming in LA and had higher production value. They were also doing a lot of episodes that were lighter in tone, funnier, and after watching season after season of really heavy, serious, spooky episodes, the funny episodes were just really great - like, you've stuck it out this long, so you get to be in on all the inside jokes, now that they have started making some :)

Okay, so... I've been going on and on about this show. I just love it. It's smart, it's scary, it's funny, and it really draws you in because you become really invested in Mulder and Scully - dare I say, even obsessed? Sometimes I actually MISS them. It's weird. I should probably stop watching so much tv.

*Note how my list of favorite shows, including X-Files, Vamp Diaries, and True Blood, consists of comedies that are not American (except Daria), and dramas that are not "normal human" dramas (either supernatural or sci-fi). Anyone care to analyze this?