February 03, 2011
The depotting mission was successful - everyone made it out alive. There were some injuries, but no fatalities. All eyeshadows have been evacuated and comfortably relocated. 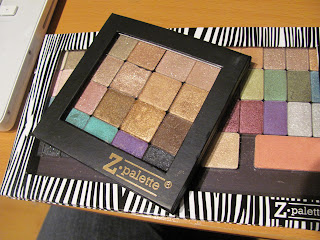 So, my Z Palettes arrived yesterday in the mail, and I spent most of my evening obsessively depotting the rest of my palettes: I emptied out a vintage shadow box, the Sustainable palette, the Urban Arsenal palette (four shadows and a blush), the Wallpaper shadow box, the Urban Ammo shadow box, the Skull shadow box, the Get Baked palette, the Midnight Cowboy palette, the Summer of Love palette, and the Foreshadow palette, as well as the Show Pony palette and the Vegan palette. (If that sounds like a lot, well, keep in mind that I still have my Naked palette, Deluxe palette, Black palette, all four Books of Shadows, and about four face cases that I've kept intact. I'm not lying when I say that I have pretty much every single UD palette from the last few years.)

I had a heck of a time prying some of those out, even though they were merely glued to cardboard palettes - I actually broke the blade of my small utility knife, and had to do the rest using a giant boxcutter blade. The most tedious part was cleaning off the glue from the underside of the pans - all you can really use is a Q-Tip soaked in rubbing alcohol, and sometimes it would take me three Q-Tips for just one pan alone. (DAMN but Urban Decay uses a lot of glue!) Along the way, some pans would chip, and I had one that broke completely that I had to repair (as I mentioned in my previous depotting post).

After everything was loosed from its palette (I kept a few for their artwork, which I will put in shadowbox frames on my wall), it was time to organize. I decided to follow the order of eyeshadows listed on Sephora's UD page, because they have them sorted by shade as opposed to sorting by name. I decided to group all of the smaller shadows together in the large palette, because I had the most of that pan size (you would not BELIEVE how many repeats I had!), and left in only the square pans that I did not already have in small-pan size. Since I had some space left, I decided to add the blush pan from Urban Arsenal as well: 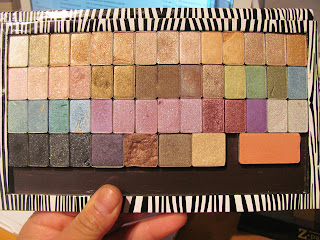 That left exactly 16 square pans, and those fit perfectly into the small Z-palette - this is good to know, because these pans are the same size pans that come in the Books of Shadows, and there are 16 shadows in each BOS, so if I ever decided to depot my BOSes, I would be able to use one small Z-Palette for each one.

So this leaves my round pans from Show Pony and Vegan. They fit perfectly into my other small Z-Palette, and I kept them in the same order that they were in the palettes, because they looked nicer that way. (Even though I had a repeat of Smog.) I really could've also left these palettes alone because I love the artwork so much, but at least this way, I will get more use out of them because they are all together.

So, while they don't look as pretty or new as they used to from all the jostling about, I think I will use them more, now that I can see the shadows themselves and not just the (beautiful!) palette boxes.

I have one more depotting mission left, and this one's a big one - as (I think) I've mentioned before, I have a MAC pro palette with 15 slots (also arrived yesterday in the mail - yesterday was like Christmas for me!), and I'm going to depot all 15 of my matte eyeshadow singles to create my "matte palette." This is a much bigger operation that requires a heating implement and a lot of time to work at my leisure, so it'll have to wait until the weekend.

After all this, I will think some more about depotting those Books of Shadows. I LOVE the shades, and would love to be able to use them more, but I also LOVE the boxes themselves, and that's why I'm hesitant to take them out. But I'm thinking that maybe (someday, when I have my own private beauty room/craft room/library/etc) I can display the empty boxes, so then I can enjoy the packaging AND the shadows - I don't know.