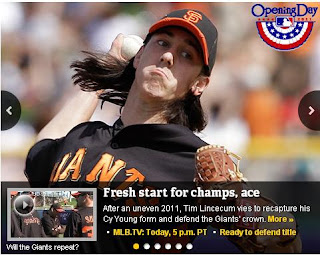 Today is Opening Day! And it's no ordinary opening day, either.

Today is our first opening day as WORLD SERIES CHAMPIONS. There is a buzz going on in the bay area that has never existed before. There is possibility, there is hope, there is celebration. There is a brand new rookie IN THE STARTING LINE UP. There are things to be excited about. Opening Day is all about possibilities and potential.

For me, it's also about signaling the approach of summer - of warmer weather, of a long vacation, of FINALLY having something GOOD to watch on TV (games) instead of whatever drivel is currently popular. My life always feels a little bit emptier when it's not baseball season. It's like, all of a sudden, my day has purpose if I know there's a game I can come home to watch. Also, oddly, baseball means more KNITTING - I usually knit the most during baseball season because I knit during games :)

And I'm really glad that today, because the Giants are World Champs and they're getting national sports coverage, the game starts at 5 instead of 1 in the afternoon like it usually does every year. It means that I get to watch it live instead of following along on my computer at work :)