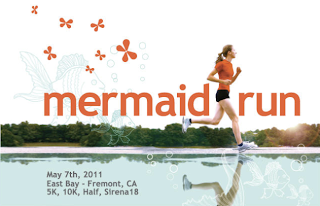 This morning I did my first 5k in YEARS with Jimmy's sister Laura - it's the Mermaid Run series (which includes a 5k, 10k, half-marathon, and an 18-miler). This one, the East Bay race, took place at Quarry Lakes Park in Fremont. Laura suckered me into this one :) because she'd heard that they had a really cool participants' shirt and finisher necklace (and they do!) and it worked out really well for my training schedule, because I would've been running about this much mileage anyway. This was Laura's first race. 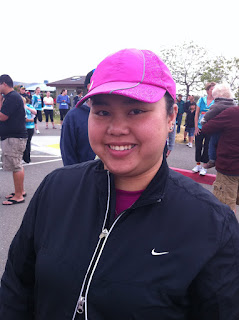 I didn't keep interval or anything this time - I just ran when I felt like it and walked when I didn't feel like running. My calves were a little tight, but otherwise, I didn't feel any pain. I have no idea what my official time is yet, because there was no actual physical line where the start line was. Also, they were using the gun time as EVERYONE'S start time and just using the timing chip to determine finish time, and since there was no physical start line, I'm not sure how long it was until I actually officially, you know, started. So eventually I just started my watch. As soon as I know the official race results, I'll post 'em. So what is officially recorded on my Garmin is 3.02 miles in 42:20, which is apparently exactly 14:00 per mile, which is about what I've been doing on my training runs anyway. So, though of COURSE I wish I'd finished faster, what's more important is that I was pretty consistent. *ETA* Official time: 43:39, for a pace of 14:04. And remember that that IS gun time, and I started further back.

The weather was overcast, mostly gray but with little patches of sunlight coming out here and there - I had my jacket on to start the race, since the wind made it pretty chilly, but it was off and hanging from my hydration belt before long. The course was an out-and-back on a gravelly dirt trail, which was nice - I've been having major shin splints lately when I do my Saturday long runs, which I think is a combination of the fact that I do my weekday runs on a treadmill and my Sat runs on concrete and the way I lace my shoes (which I remedied). I also picked up a compression sleeve for my calf, which ended up REALLY helping a lot. What I am happiest about is that I had a very comfortable run.

The last tenth of the mile was on a paved path, so I felt more comfortable going a bit faster (since I didn't have to worry about holes and rocks), so I'm zooming along the last stretch until I get to the finish chute which is on VERY VERY plush grass!!!!! Like, I could feel my feet sinking into the ground as I was going the last ten yards across the electronic timing pads!!! They really do know how to make us work, don't they?

And of course, what was there to greet me at the end but my finishers' necklace... :)

It was a really lovely race - other than the start line business, I think it was well-organized and well-run, and I like that it was "small." (I've only been doing the NWM for the last few years, so I'm so used to 20,000 people!) I'm trying to do a lot more races this year (got another 5k coming up in June), so I'm glad I did this one - I felt great, didn't feel any pressure, and I had a good time :)