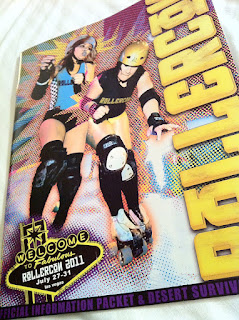 Form, Speed, and Stride
This was a great class to kick off Rollercon with, for me, because it focused on skating in correct stance and on crossovers. I’m no stranger to either of these concepts, but it is something that should be reviewed from time to time, because I can get lazy with my skating. I need reminding so that I don’t fall into bad habits. There wasn’t anything we did in the class that I’ve never done before, but again, it’s good to revisit those drills from time to time. We did a lot of skating on all 8’s, worked on pushing with each leg, and then put it all together into big crossovers. This class was supposed to be taught by Atomatrix, who is like, LEGENDARY, but she couldn’t make it, so Tannibal Lecter (who is also super awesome) filled in.

Baby Got Back
This class, taught by Quadzilla, was about using your butt to block (in case you couldn’t tell by the title!), which I in fact need a lot of work on. This class was a STRUGGLE for me, but in a good way, because I got to see what my flaws were and what I need to work on. Also, there were people I skated with in the class (in pairs or small groups) who were WAY WAY better than me, so that was a great learning experience for me too.

I definitely learned a lot in this class – the proper way to “sit” on someone when you’re blocking them so that you’re not overextended or out of position, and then how to move laterally to block them (turn your foot the direction you want to go and roll! So simple, yet, why did I never think of this before?). I learned about the “pop tart,” which is where you bump the jammer behind you with your butt in their midsection, and then as they are bent over from the contact, you straighten up so that your back hits their front, forcing them to either stand up (making them more vulnerable) or take a shoulder in the face. You can bet that I will be working on that at practice!

We got into groups of five, with one person, the blocker, in front, and the other four forming a wall behind her, numbered 1-4 from inside to outside. The coach would call out a number, and the blocker in front would have to positionally block that person and force her out of line (not hitting, but blocking), while that person is trying to get around them. This drill was HARD and exhausting because everyone else in my group was more advanced than me, but they were really very kind and supportive, and helpful – when it was my turn to block, a couple of the girls who I was blocking would help me out by giving me instructions (“Slow down so you make contact! Okay, now POP!”). The blocker got a chance to block everyone, and everyone got a chance to be the blocker. It was exhausting because you end up taking 10 minutes per turn as a blocker (and no jam lasts that long, obviously), but it was a really good exercise, one that I’ll definitely take back to our league.

Skating Skills for Blockers
Demanda Riot!!! Is an awesome, awesome blocker for BADG’s Richmond Wrecking Belles and their all-star team, and she taught this class. This was DEFINITELY the one I was looking forward to most, because she’s kind of my hero. She has also always kind of scared me a little bit. 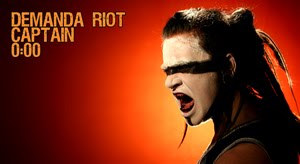 In person (and without the war paint), she was awesomely nice. SO nice. I’d still be scared of her if I had to skate with her (especially against her), but now I know that she’s very easy to talk to. (I did have my fair share of inner monologue gushy fangirling, like an "OMG DEMANDA RIOT IS TALKING TO ME OMG I'M NOT WORTHY I'M NOT WORTHY" sort of thing.)

So, this class was great because it focused not on blocking itself, but on the footwork, agility, and body positioning needed for good blocking. I had one meager piece of paper in my bag, so I crammed as much information as I could onto it in between turns on the track, because we did SO much that was useful, and there were also drills she explained to us that we didn’t get a chance to do.

i.     Side step (step out, feet together, repeat) – the notable lesson here is NOT to center your weight between your feet, because you can only step out so far. It makes it easier to move further in either direction
ii.     Crossover steps
iii.     Scooter steps: Like what Quadzilla showed us yesterday – pushing to the side
iv.     Toe stop steps
i.     Beginner group went first – just practiced stepping across the floor
ii.     Intermediate – Stepped at 45-degree angles while moving around the track
iii.     Advanced – Did inside/outsides on the whistle, changing step types on the whistle; then they did the same but with partners giving resistance
iv.     Beginners got back out and did what the intermediates did
v.     Intermediates got back out and did the partner drill
I didn’t do any more classes this day, but I did watch an AWESOME EPIC scrimmage between two teams of basically derby’s all-star men and women. For example, all of the instructors mentioned above (including Atomatrix) skated in it. DUDE, was I starstruck! It was a low-scoring game, which meant that the blocking was fierce (and it was!) and there was some awesome skating all around from both teams. It was definitely a highlight. It was a chance for me to be a fan, and I enjoyed it so much, because I NEVER get to see so many derby “celebrities” skating in person. 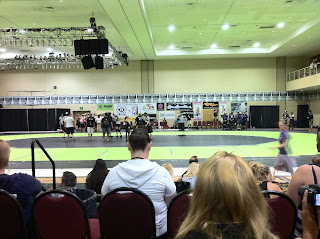 High Intensity Bootcamp
Yeah, I only stayed ten minutes. I was exhausted, and my body was having NONE of those frog jumps. Maybe next year, I’ll be in better shape.

Derbyoga
This was a really lovely, relaxing class (compared to the ten minutes of bootcamp). I don’t know that any of it felt really derby-specific, but we did do a lot of hip-opening stretches that felt great.

By the way, please insert a frowny face right here, because there was another supremely epic all-star bout today too, only I did not arrive in time to get seats in the stands nor the skyboxes. FROWN.

That Time of the Month: Skate Maintenance
This was a very necessary class for me, as I know NOTHING about skates or how to take care of them. The instructor was Dirty Deborah Harry of OC Rollergirls, and she is AWESOME. Not just totally knowledgeable (she owns a skate shop in SoCal), but she’s just hilarious. She was very engaging and entertaining.

In the class, we took apart one of our skates, and she went over what each part was, what its function was, and how to know when to replace them. She made lots of great recommendations for basic things to keep in our gear kit, and I came away with a much greater understanding of my equipment.

DDH mentioned that she would be teaching an on-skates class a couple hours after Skate Maintenance, and I adored her so much that I decided to go.

Skate Pretty, then Skate Derby
This class was great!!! We started out balancing in normal position, and she talked about where we put our weight and such, and then talked about balancing on our edges. Then we did awesome “pretty” stuff like transitions (turning around), skating backwards, jumping (up, and with a 180 turn), and spinning! I can SPIN now!!!! It’s stuff that is more in the category of technical skating skills than derby skills, but could definitely be useful in roller derby. Plus, the class was TOTALLY fun because of DDH. 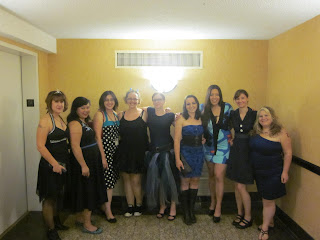 I had SO MUCH fun, and I’ve learned so much these last few days. I got to watch some awesome skating, I was taught by some awesome skaters, and I had a blast hanging out with people not just from my league but from other leagues in my area. I even met some derby skaters that I knew from Ravelry! (They recognized me by my name on my shirt.) I am also very, very exhausted. Every class is an hour and a half, and considering how we skate for two hours at practice twice a WEEK, you can see why doing even one class a day was pretty exhausting. Plus, unless you schedule things with a lot of time in between, you do not have enough time for your pads to dry before you have to put them back on. (Eww, wet gear!) Still, I wish I had gone to more things, maximized my time there. As you can see, I did NOT go to all the things I planned to go to (but then, I did end up going to some things that I DIDN'T plan to, and that's good too!) It's okay, it's only my first Rollercon. I'll just chalk it up to me wanting to just take everything in, and next year when I come back, I'll be a much better/more experienced skater, and I'll get even more out of it :)