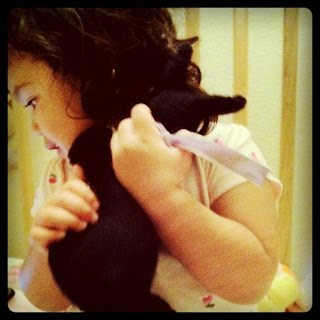 This one is on my list as an expanding-my-knitting-repertoire item. I've knitted lots of things, but I've never really done a toy before. I found this pattern on Ravelry and thought it would be perfect, as Jolie loves dogs, and it more or less looks like our own little black dog. (He's not a Scottish terrier, but he's smallish. In hindsight, I should've knit floppy ears.) I've named it Bo because that's what Jolie calls our dog (even though that's not his name). Bo was knit using Patons Classic Wool in black and size 6 needles. (And I used all the rest of the yarn from the skein to stuff it, since I couldn't find any stuffing.) The sewing and seaming was tedious and long, but it came together nicely. Bo wears a purple velour ribbon.

Jolie's snuggling with Bo in her crib right now as we speak! 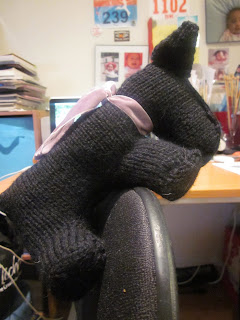