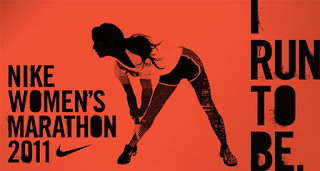 This was supposed to be the grand year that I completed a full marathon, but alas, it wasn't to be. I WILL do it next year.

However, I made a pretty good go of it for the half yesterday. I haven't been training, but I've been skating a ton, and I think that helped, because I felt better throughout the race than I ever have in previous years. Becca and I kept up our running interval through the first half (minus the hills, which were torturous), and I think I could've kept it up longer, but Becca was struggling a little with running, so we walked the second half.

(I could tell I was stronger and could've run more because we ran towards the finish line, and I totally felt FINE. I've done the last-straightaway-sprint-to-the-finish before, and I'm usually limping and really slow and just plain in PAIN, but yesterday, I was like, Dude! I'm just bouncing in!!!)

So, all things considered, I feel really good about yesterday's race, and I think I've regained my motivation to be a runner.

Next stop: Disneyland for the Tinkerbell Half-Marathon in January!!!