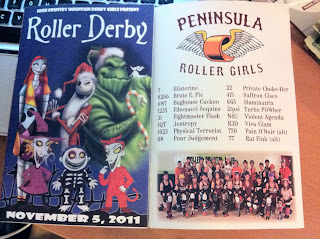 Last night was PRG's second official bout, but it was MY first one. And as we stood for a large team photo after it was all over, my eyes were shining with tears.

THIS. This was what I've been waiting for. This is was the ultimate goal, what I've been working towards for two long years - the chance to make roster, to be one of the top 14 skaters in our league and skate in a bout. I remember the early days, volunteering at SVRG bouts and watching them skate, wondering if that would ever be me someday.

We'd won, a sweeping victory over the High Country Mountain Derby Girls Gold Diggers team of Sonora. My eyes were shining with tears, I tell you.

And of course, making roster in the first place is a victory in itself, and I was thrilled to no end when it was announced.

Last night against Sonora? Not just a victory, but a HUGE one. 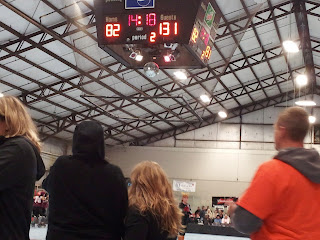 And we definitely worked for it. Our practices have been tough this month - lots of strategy, lots drills, lots of footwork. My body is constantly fatigued and sore these days. During the bout itself, the Gold Diggers played a hard-hitting, aggressive game, on slick sport court tile, at high elevation in the mountains, which had me roll my ankle and aggravate my elbow sprain from two separate falls. (I'm writing this post now at 7 in the morning because I can't sleep due to the aches and pains I'm feeling right now.) One of our other skaters had her finger get run over. We all got pretty beat-up, I think.

So what worked for us? Lots of strategy. As one of the Gold Diggers posted on our Facebook page afterwards, we played a head game. We manipulated the clock to our advantage, formed 4-walls, took advantage of power jams, got lead jammer often, and communicated, communicated, communicated. Anyone who came to the bout looking for a "knock a b**** down!" type of game still got their money's worth, but were probably thrown off by a lot of what we were doing. It wasn't until the last half of the first period that the other team was really starting to try to counter our strategy, and by then it was too little, too late.

I know that when the visiting team wins, we're not supposed to be so exuberant in front of their home crowd, but we couldn't help it - this was a momentous night for us. The victory laps we took afterwards, with all our friends' smiling faces and hands outstretched for the high-five, were delicious. After we took our team photo, we headed back to our locker room to take off all our gear and to scream deliriously at each other some more. My euphoria carried me all the way home, through a long drive through the rain in mostly pitch-blackness.

Not a bad way to start my bouting career, eh? I know that not all bouts will be like this (as our previous team-on-team attempts have indicated), but this one was totally sweet. Not only can I now say that I've got a bout under my belt, but I've got a win as well.