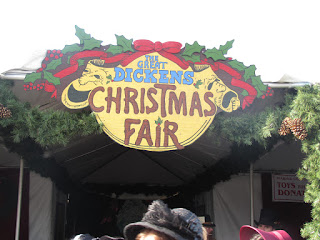 It should come as no shock to you that I am a lover of 19th century British literature. The Romantics and the Victorians were absolutely my favorite periods of literature, along with the corresponding American period of literature of transcendentalism. I LOVE it.

So of course, attending the annual Dickens Christmas Fair that is held up near San Francisco has been on my to-do list for a long time. It's like a pilgrimage to the holy land of Victorian nerdiness. It's like Ren Faire in that there are TONS of people decked out in full costume, appropriate food from the period, and shows and dancing. It's like stepping straight into the pages of a Dickens novel. Putting on my most Victorian piece of clothing (my cropped red waistcoat), I got ready to step back into 19th century London.

In attendance with me were Becca and Angela.

The excitement began in the parking lot. We could already see so many people exiting their very modern vehicles in their very old-fashioned garb - even little babies in newsboy caps! Also, it was Steampunk Day, so we saw a LOT of AWESOME steampunk outfits. Entertaining the line of people waiting to purchase their tickets were carolers: 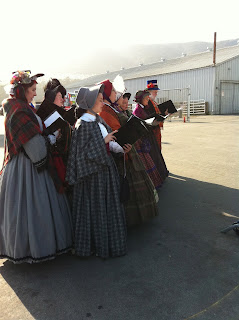 The event programs were in the form of newspapers, printed in the old time typeface: 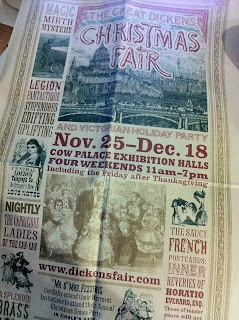 It was bustling and loud, with people everywhere walking to and fro - not just people attending the fair, but fair employees! I don't know if they were actors or enthusiasts, but there were simply people walking around whose job it was to add to the ambiance. People spoke in British accents and said "Pardon me, miss!" when they bumped into me. There were random working-class drunkards walking around as well as ladies and gentlemen of good standing, and there were even characters from A Christmas Carol walking around, like Ebenezer Scrooge. We took a photo with the Ghost of Christmas Present: 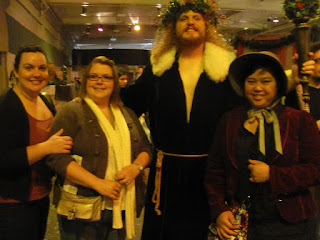 Oh yes, I bought a bonnet. I've always wanted a bonnet, which I understand is probably a strange thing to long for, but keep in mind that I've spent a great many hours of my life watching Jane Austen movies. So, I bought myself a bonnet, and I do think it suits me very well. I'm planning to bring this style back singlehandedly.

The beauty of Dickens Fair is that they mind EVERY little detail. They hang huge curtains over the walls where the restrooms are, because they don't want stuff like that to take us out of the experience. Instead of announcing people over the loudspeaker, there are messenger people who just walk around yelling "Telegram for ______!!!" (How exhausted those people must be!) It really WAS like stepping into a Dickens book! I could've spent hours just sitting around and watching people. Here's a little taste: 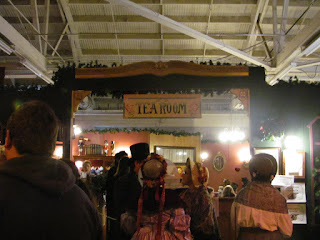 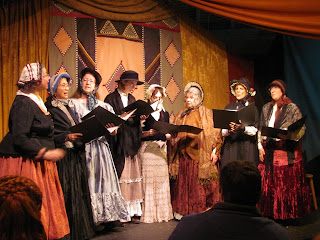 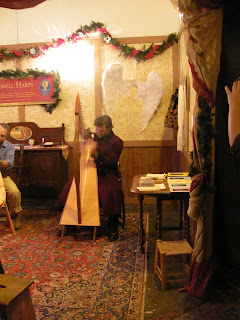 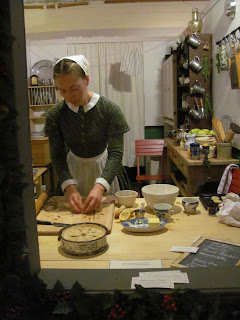 The floor was set up to be like the streets of London, with small little storefronts and pubs and merchant carts. The last picture above was of a little "window" into a kitchen, with a demonstration of a woman making pie how it would've been done back then. There were haberdashers and a corsetry shop, lots of jewelers and pubs and bakeries. There was even an area called "The London Docks" where there were small shops where pirates sell their booty.

On one corner was this: 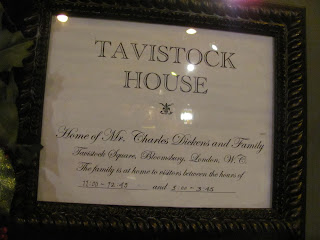 I happen to be standing outside while "Charles Dickens" and his family were sitting down to a holiday dinner and a reading of A Christmas Carol. 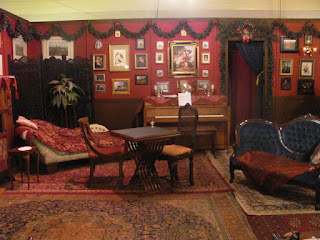 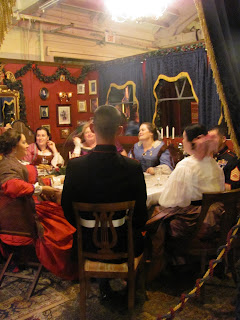 And then in another area, I got to watch a bit of a boxing match :) 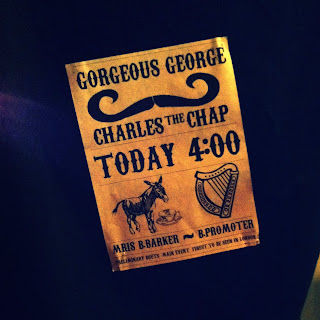 Totally awesome. I love how PEOPLE serve as the ring posts.

And of course, what period movie is complete without dancing? It's how people socialized and got to know each other. I was glad to be able to witness some dancing that I've been forever watching in film:

The experience isn't complete without food, so we had to have a taste of that too. Not pictured is the chocolate-dipped shortbread cookie I ate and the hot chocolate eggnog that I drank.


And the piece de resistance - our very own Victorian parlour photo. We all came to the conclusion that if we had lived at the time, we'd be fallen women: 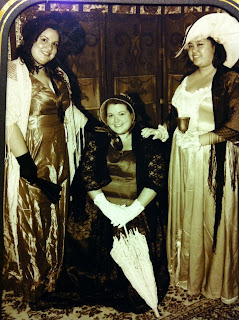 The clinching moment of the entire day: While we were in line for food, a woman (who was undoubtedly one of the Fair's "actors") came up to us, in full costume and in character, to ask us for some advice. I cannot possibly recall what she said verbatim, so you'll just have to trust me that it was quite awesome. Basically, she told us that she was a widow, and has been for a little while now. Lately, her (male) neighbor has been throwing vegetables over the wall into her yard! (She was holding a squash in her hand, by the way!) She wanted to know if this was "some new-fangled way of courting, or if he's just a bit touched in the head." When Becca suggested that she cook something with the vegetables and bring them over to her neighbor, she blushed and said, "Oh! That is FAR too forward!" It was just totally adorable. It totally made my day to have a Victorian woman come up and talk to us. I think I squee-d a little :)

It was awesome. SO AWESOME. I can't wait to go back again. What helped make the experience is that both Becca and Angela are totally into this stuff too - it wouldn't have been as fun to go with someone who doesn't care about Dickens or Victorians. We three felt free to just TOTALLY geek out and get excited about everything around us, without getting embarrassed, because everyone around us feels just the same. It really was our own world. 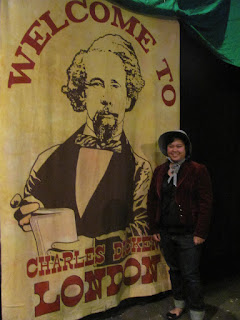 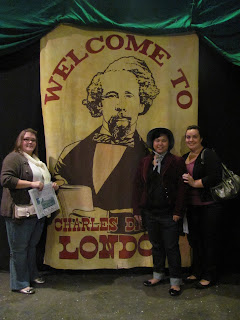