It's not sweat, it's LIQUID AWESOME

I don't care what anyone else says - Disneyland really IS a world of magic.

This weekend was the Tinkerbell Half-Marathon in Anaheim, and I've been excited for this one for a while. I haven't been to Disneyland in about five or six years, and this time, I got to RUN through it as well. In addition to racing fun, this was also Jolie's first trip to Disneyland, and though she was a bit young for it, she still had a blast.

Becca, my parents, Jolie, and I drove down in a van, fighting SoCal traffic (didn't miss that) and arriving in time to pick up our race packets and attend the expo: 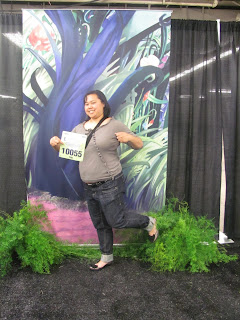 Becca and I also found some AWESOME shirts to wear during the race itself. The company (whose name escapes me at the moment - I've got their card at home) is owned by a couple, and the wife does all the designs. It's organic cotton/bamboo:


Saturday:
FUN DAY! We hit Disneyland first, and mostly stuck together because, you know, it's Jolie's first trip to Disneyland, and I wanted to be there with her when she saw it for the first time.

Upon entering the park, we first saw Cruella DeVil (LOVE HER!) walking around the entrance/Main Street and NOT taking pictures with anyone (because she's a villain, remember?). But then we saw a bunch of other characters who were out to greet all the guests. Jolie was SUPER excited to see Mickey Mouse, but the line for pictures with him was so long that we decided to go say hi to this guy instead:

Then we headed to Fantasyland, since there were more kid-friendly rides that Jolie would enjoy there. We first headed to King Arthur's carousel (because Jolie loves merry-go-rounds), and it was funny because, excited as she was, she actually got a little scared once it sped up a little. (She's only been riding the little tiny ones in front of grocery stores and at malls!) But she liked it a lot!

We also went on the Pinocchio ride (which was a little scary for her - the darkness and loud noise), the Casey Jr circus train, and the Alice in Wonderland teacups (which she was less-than-impressed with). It's a Small World was closed, but in front of it there was a little area set up for Chinese New Year, and there were performances going on there all day - lion dancing, kids doing cultural dance, etc. My parents decided to stay there with Jolie while Becca and I split off to hit up the grown-up rides. They took Jolie over to the little theatre behind It's A Small World (where she got to dance with Princesses!) and to Toon Town, where the rode the Disneyland train, like, three times, because Jolie is obsessed with choo-choos, as she calls them.

Becca and I headed over to Tomorrowland, where I got this jaunty hat: 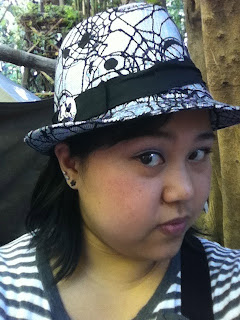 and we picked up Fast Passes for Space Mountain because waiting 50 minutes in the sun did NOT sound great. (SoCal, what is UP with your weather? 80 degrees at the end of January? Really??)

So, since we had a couple hours to kill, we then went to Adventureland to go on the Indiana Jones ride, which was SO much more fun than I remembered it being! And the wait was decent. Then we went on the Haunted Mansion ride, which still spooks me, because I think it would be horrible to actually get trapped in a place like that, and then my parents and Jolie rode the train over and we ate lunch at Orleans Square. By the time that was all over, it was time to go to Space Mountain, and OH MAN, that was the highlight of the whole day: 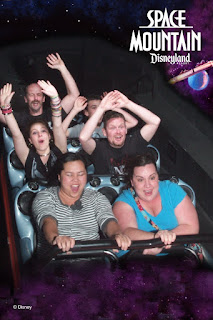 That is just totally my favorite ride at Disneyland. I am gripping the bar instead of holding my arms up because once I saw a video of how Space Mountain looks with the lights on, and ever since then, I've had this fear of, like, losing a hand on that ride, even though I'm not actually tall, so I keep my head and limbs pulled in for this one.

Becca and I had park hopper passes, so we then headed over to California Adventure park. I've never been to this one, so I was excited to see what it looked like. We first went on Soarin' Over California, which I thought was AWESOME - it is basically a motion simulator that takes you on an aerial tour of California, but your legs dangle and they spray scents at you! Like, when you fly over orange groves and wine country, you smell oranges and grapes! It was pretty dang cool.

Then we just kinda walked around a bit - by that point, I was feeling really tired and dehydrated, so I didn't really feel like any more rides, but I do have to say that I LOVED the pier area there. 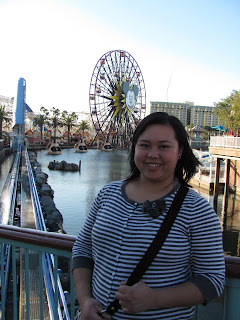 We saw Woody and Buzz and Sully (from Monsters Inc). And there was some parade/dance show with the Incredibles. And the food smells on the pier were just assaulting me from all sides - turkey legs, chimichangas, kettle corn, buttered corn... yeah, CRAZY. (And crazy expensive!) We watched the little "how sourdough bread is made" tour thingy and just basically walked around the whole park.

We met up with my parents and Jolie again for dinner in Downtown Disney, and then brought Jolie to watch the World of Color show in CA Adventure. Then had a hell of a time walking back to our hotel in the dark with sore feet! 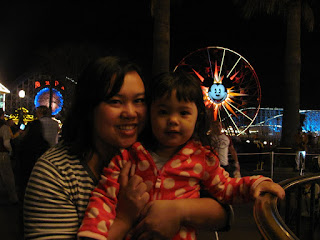 Got up at 4:30. Got dressed in our awesome race outfits and headed down to the start line. 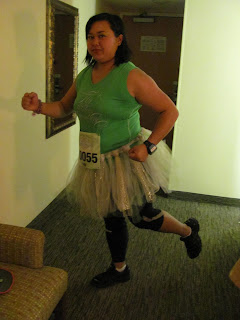 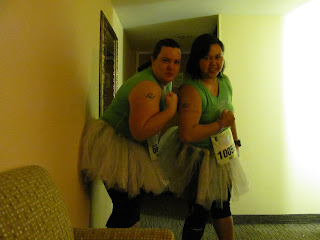 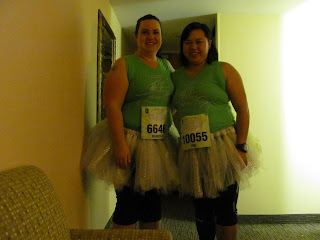 At Disneyland, they don't just have a gun going off - they shoot fireworks! However, we were in the last corral, so it took another 40 minutes before we crossed the start line. Dancing on a platform at the start were Minnie Mouse and Daisy Duck, wearing running jackets :)

It was ridiculously warm for so early in the morning, so it was comfortable at the time. Between miles 1 and 4, the race course goes THROUGH Disneyland, which I was super excited about, although most of what we saw were the employee area. However, we did eventually get to run through the park itself, and there were princesses and pirates and other characters along the way to greet us :) We didn't stop for pictures though.

Actually, we didn't have to stop too much - we ran almost all of the first NINE miles. Yeah, slowly, but it was still running. That's a personal best - we only took one lengthy walk break (like, three minutes), and we walked through the water stations (because who wants to slip and twist their ankle on wet ground?), but we did REALLY well, and even though we ended up walking the last four miles, we were so on pace for the beginning part that we finished in 3 hours and 26 minutes, 4 minutes faster than our goal time. (BTW, miles 11 and 12 were through CA Adventure park, which was also fun - we got to see Jessie and an army guy from Toy Story! And more pirates!)

So yeah, it was awesome, and my parents drove us back to our hotel. We were exhausted and just about dying, but SO proud of how we did. 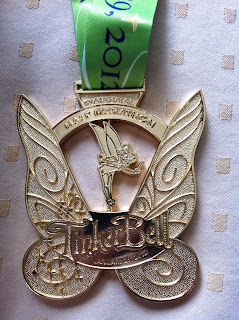 I feel like this race was a personal best for me - not just in terms of time, but in terms of effort. I really feel like I EARNED that medal, and I pushed my body really hard, and it performed admirably. I still wish I could've run more, but nine miles is pretty frickin' great, considering how this is the first time in a long time that I was REALLY going for a goal time and trying to push myself.

Next up is the Divas Half-Marathon in May. Let's see if I can do even better!