So, I've heard a lot about Obsessive Compulsive Cosmetics for a while, especially their lip tars. When I finally ordered one, it came with a free sample of their loose pigment in Rime. (This was a separate beauty site, not their brand site, because the lip tar shade I wanted had been discontinued.) Rime is a beautiful ice blue with gold-y flecks in the container, but on me (probably because of the other shadows I chose) it looks gray. 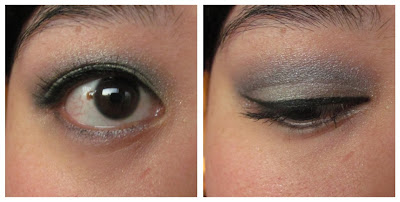