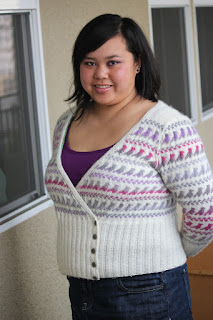 This sweater was a learning experience. I set out to learn stranded knitting and steeking, and of course, I could've chosen a smaller, simpler project, but this pattern has had be bewitched since I first saw it. Of course, even though I bought the pattern, I lived in fear of it for a couple of years before I finally decided to take the plunge and buy the yarn.

The knitting part took forever - it was months before I finally finished even the beaded ribbing portion of the body, and then getting started on the color motif took a while because I was several rows through before I realized I had the wrong stitch count and had to rip it all back. Ugh. (And then, of course, I kept putting it off to work on other things.)

Most of the rest of it came together within the last couple of months - the sleeves knit up quickly, and I finally joined them with the rest of the body a couple weeks ago. And these past two weeks alone I've been really absorbed in finishing up the rest of the knitting portion so I could get to the whole point of this project - cutting the steek! 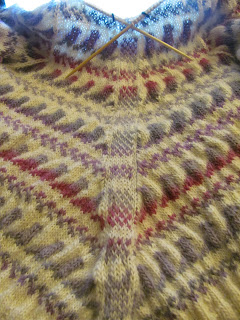 So here's the steek - it's the column of checkered stitches in the middle, which is where the sweater will be cut open to create the front of the cardigan.

Of course, as anyone can tell you, cutting open your knitting means unraveling! And I think only the fuzziest of wools might stick together well enough not to require reinforcement, which Chroma is not, as evidenced by how little trouble I had ripping it back. So I decided to go with a crochet reinforcement, using Eunny Jang's tutorial to help me.

(My heart was pounding this ENTIRE TIME that I was cutting. I'm not kidding.)