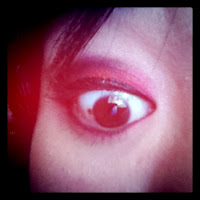 January and February are traditionally lousy for me in terms of health and anxiety, and this year has been no exception:

- I injured my glute, which forced me to take off a full week with no activity
- Then I got sick
- Then final exams hit, and I was super stressed out and tired from staying up late to get my grading done and I had a lot of anxiety about starting the new semester
- In the meantime, I was (and still am) having all these weird issues with my eyes swelling and getting irritated and turning red. They're itchy ALL THE TIME, even though I'm using Visine by the bucketload. This happens whether I wear makeup or not.
- And this is a separate issue, even though it also involves my eyes, but apparently the only painkiller I can take these days is acetominaphen, because if I take ibuprofen or naproxin, my EYELIDS swell up. I did not used to have this before.
- Then I got REALLY sick, like, dizzy, nauseous, congested, and on the verge of losing my voice completely. I missed three days of work in a period of two weeks.

But I'm finally starting to feel better. I feel much less hazy, and I'm not blowing my nose for a full twenty minutes every morning. My body feels fine and uninjured, though weak from not having used it much. I went to Crossfit twice this week and went to practice once. Though my eyes continue to irritate me tons.

First of all, I need to stop skipping practice and Crossfit and running. I am in a position to EASILY work out tons, but the combination of bad health and bad motivation has had me down for the count. The truth is, I actually really ENJOY working out. (I do, I swear!) The problem is inertia. The problem is getting me to go in the first place. Once I'm there, I'm in, but first I need to GO.

Second of all, I need to make better diet choices. I've been talking to a good friend about her experiences on the Paleo diet, and though she hasn't been on it long, she's feeling great and getting good results - not just in terms of weight loss, but in terms of her day-to-day health. And I want that too - I want to stop feeling like crap all the time, like I said. So I've been doing a lot of reading about it. And I think I want to try it, for a month at least.

It's not going to be easy for me - a lot of the things that I love are things that are not allowed on the Paleo diet - rice, pho, soda, cupcakes, ice cream, cheese, cookies, hot chocolate, mac & cheese out of the blue box. (No more salted caramels - ouch!) I'm the carb and dairy QUEEN. I am also the processed foods queen, considering how I'm a lousy cook, and half my meals come from a box, a can, or a drive-thru. So why would I suddenly want to give that all up?

Because I'm THAT TIRED of feeling ill all the time. And I think I am just reaching that breaking point of total desperation where I just might be willing to cut all that crap out of my life so I can start feeling better. And I really don't know if I can just eat LESS of all that stuff - if I had the self-control to do that in the first place, I wouldn't be having this problem. So maybe I just need to NOT eat it for a while. Take some time off and detox. (Without having to drink that weird lemon juice/chili powder sh**.) And it's ALWAYS a good idea not to eat processed foods.

So I'll try it. I know some derby skaters and Crossfitters who do Paleo, and they are some awesome specimens of physicality. It's gotten really popular, and there are a lot of good (free!) resources online, and the best part is that I don't really have to buy anything weird or expensive or out of the ordinary (in terms of foods or tools) to do it. It's basically lean meat, veggies, some good fats - four times a day. I can do it. I will try.

Right now, I'm in the research phase. I'm doing a lot of reading, bookmarking sites, writing down recipes and tips, and basically gearing up for it. I'm ready to try something new in hopes that it will help me live a better life. It may not be a panacea, but it's a step in the right direction.