February 17, 2012
These colors are actually NOT the brightest shades Sugarpill has by far - and that's not a statement against the colors I used, but rather, a statement in favor of the other eye shadows. (Dude, have you SEEN Dollipop? I once heard it described as "retina-burning," and I have to say, that's quite apt.)

The clincher is the crease color I used, Royal Sugar - it's a BEAUTIFUL shade of blue, but I've had trouble figuring out how to incorporate it into a wearable look. (That is, wearable in the normal world. I don't "club" and I'm not in high fashion.) So far, I've only been able to wear it in small bits (never just "all over the lid"), and I have to mute it/blend SUPER well. 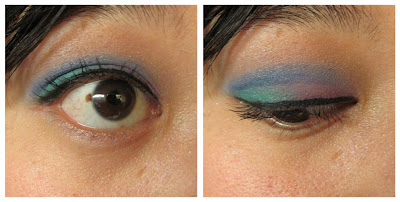