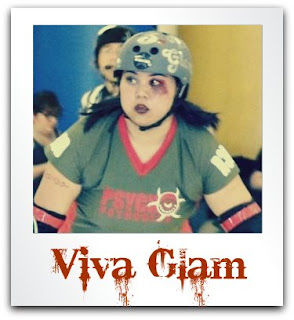 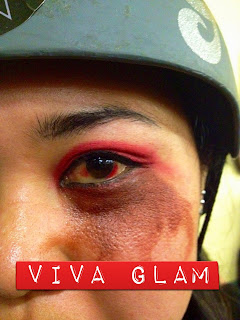 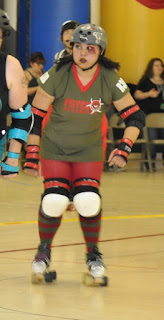 - I had "normal" olive green eye makeup on my right eye - I don't remember the name of the shade on the lid, but it's Urban Decay, and it was originally in a Book of Shadows (because the pan was square). It was all over the lid as well as along the lower lash line
- UD Libertine in the crease/contour
- Sugarpill Absinthe patted just in the center of the lid
- UD eye pencil in Perversion along the upper lash line
- MUFE Smoky Lash mascara

But no one cares about that eye. The other one:

- Sugarpill Love+ all over the lid and all around the eye
- Same eye liner and mascara as above
- For the bleeding effect - I mixed a 2-3 drops of mixing medium (I can't remember the name of the brand I have, I bought it on Etsy, but you can use Visine) with Morgana Cryptoria's Evil Eye Candy eye shadow so it was a watery consistency, NOT paste! And tried to make it look like it was streaking down my face. It stayed on really well, considering all the sweating. I don't believe I used any setting spray.

And I topped the whole thing off with Morgana Cryptoria's Charleston lipstick (from their 1920's collection, which I love). Which also stayed on REALLY well with all the yelling and drinking water and mouthguard removing.