A tale of four poke holes 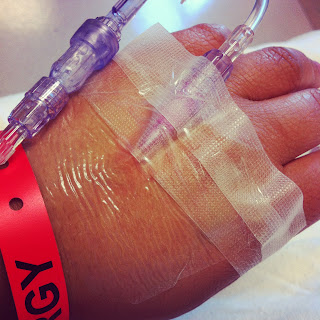 I've been home for a few hours now, and I'm feeling okay.

It was pretty nerve-wracking, at the beginning. I came alone to the hospital because I didn't want Jimmy to have to sit around waiting for me, so I was admitted and taken to my hospital bed (it wasn't in a room, but a "station") and given my gown and all that. (Yup, back was open and everything. SEXY. There were a couple nurses trying to read my Radiohead tattoo.)

My pulse was quick, and I was crying a little bit out of anxiety, I suppose. The last time I stayed at the hospital was when Jolie was in the NICU, and THAT was a really emotional time for me, so now, every time I smell Kaiser's hand soap or hand sanitizer, it takes me back to that time full of uncertainty and tears and loneliness - I definitely cried a little bit as I sat there waiting, but what helped a lot was reading the dozens of messages  from my friends (real-life and online) on my Facebook. If you ever catch me whining about feeling unloved, feel free to reach out of the screen and smack me, because today, there were lots of people pulling for me and wishing me well, and that is a wonderful feeling.

After not too long, a bunch of nurses and doctors came in to talk to me and ask me the same questions over and over. I got an IV put in (my very first IV! I had to take a picture), and had a slight ordeal with not being able to remove my nose ring: they ended up taping it with medical tape, and warned me that there was a SLIGHT chance that the metal could heat up and burn... something about cauterizing... youch. But I literally had no idea how to remove my nose ring, because I never have before, in the six years that I've had it! A nurse even tried to help me (she had to stick her finger inside my nose!), but it didn't work out. Everyone was really nice and smiley and comforting. (Well, as comforting as you can be to someone who's about to be put out and cut into like Thanksgiving turkey OH GOD OH GOD.) One of the scrubs told me that he read in my file that I played roller derby (what? they asked me what I do for physical activity), so there was a brief conversation about that with all the other scrubs (sorry, I don't specifically remember whose title was what) - "What's the object of the game? How do you score points? Do people ever get hurt?" And of course, talking about derby always makes me happy. I even showed them my bruise on my knee, and they, a team of surgeons and surgical nurses, grimaced.

And then all of a sudden, they were wheeling me to the OR and sticking electrodes and stuff on me and I had to state my name for the record like a court witness or something. OH GOD HERE WE GO. The anesthesiologist put an oxygen mask on my face. They had told me ahead of time that they would put sleep stuff in my IV, and then when I got the mask, I would be asked to count backwards from ten and then I would be asleep.

To be honest, I didn't even get to the counting part. The mask was kind of large and was in my line of vision, so as the room fuzzed up a little bit from the stuff in my IV, I decided just to close my eyes since I couldn't see anything anyway. And the last thing I remember was hearing the guy telling one of the other scrubs, "Yeah! I asked her about it [derby] and she was telling us how they play..."

And that was it. One minute I was staring up at the various fixtures attached to the ceiling in the OR, and the next minute I was blinking up at a completely different ceiling. My eyes were super heavy, and I could only open them every few breaths - it took me a REALLY long time before I could open them and they could actually stay open longer than a blink. My throat felt scratchy and my abdomen felt like I'd just done a super WOD - all things that I expected. And I was SO woozy.

Jimmy showed up about half an hour later (in my grogginess, I could hear the nurse calling him on the phone), and they moved me into a reclining chair. The nausea was really hitting me, and every motion of my head made me want to puke - seriously, this was even worse than that day I got really sick and threw up and burst a blood vessel in my eye. I managed NOT to puke, but they had to give me a super dose of super nausea medication, and it took another hour or so of sitting there before I could finally lift my head. I dressed very, very slowly and was wheeled very, very slowly to the curb, where Jimmy had pulled up the car. And then we came home and I conked out.

And that was a few hours ago. I'm feeling FAR less nauseous now, and I'm able to get up and walk around the apartment without any trouble. I'm in a little bit of pain (again, sore like I'd done some crazy core exercises), but um, I guess that's why they gave me pain medication. And I should probably go take some. (It's manageable. I'm fine.)

So now I'm gallbladder-less. And I have four short purple scars in various places on my abdomen that are apparently being held together by skin glue. (SKIN GLUE? SERIOUSLY? THAT'S A THING?) Everyone was making it sound like I'd be miserable and bed-ridden for a few days, but seriously, I bet I could go drive myself to get a bowl of pho right now. (I'm not going to. Obviously. But I bet I could.)

I will be puttering around the house for a few days, and then I plan to gradually return to my normal levels of badassery, a little at a time.

This concludes the story of my first surgery ever.

No, they didn't offer to let me keep my gallstones, and I forgot to ask. Dammit.