June 09, 2012
I am DARN proud to announce that the Psychopathogens have taken yet another victory over the Damas de los Muertos, in the second home bout of the season for the Peninsula Roller Girls!

I won't say it was the best I've ever played. Truth be told, I felt a bit sloppy. I still only got two majors, but I was falling a lot bigger. On the other hand, I guess you could say I was playing more aggressively and going in for big hits that I usually don't go for - and more often than not, it paid off. So there's that. Whatever. I wasn't super happy with my lack of accuracy in my hits and my still-struggling level of stamina, but I survived it, and I like to think that I contributed to our win. At the very least, I gave the audience a good show, because I could hear the collective "OHHHHHH!" from the crowd a few times when I took someone down. I'd like to think that the people who just came to see girls get knocked on their asses got their money's worth.

But I'm really proud of my team. We played tight and kept our heads, even when certain things weren't going our way (like when one of our jammers kept going to the penalty box, and I was like, "WTF? Why do they keep picking on her??"). We communicated and helped each other and we played like a team. You could have a gazillion talented individuals on one team, but that group will never be as good as it could be until they all learn to play together as a team. And I think that's one of our strengths. Luckily, we have both talented skaters AND great teamwork.

We took the lead after the second or third jam and it never changed. It wasn't quite a runaway victory the way the first bout was though - at times, the point deficit hovered around twenty. There were moments when we got split up or things got a little chaotic, but we always pulled it back together. 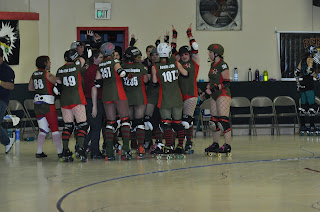 I don't think I'll ever forget this though - the last ten or so minutes of the bout were magic. As I said, the point deficit was hovering around twenty, which is still anyone's game in roller derby. But then all of a sudden we really pulled ahead - I think it was a combination of the Damas jammer going to the box for a jam or so, some flippin' awesome skating from our jammers, and then, in the last two or three jams, our blockers just totally flipped a switch or something - I remember standing at our bench yelling "Contain! Contain!" along with the other girls on the bench, indicating that they were to focus on the Damas' jammer and just let our jammer do her thing. And I really felt like a switch was flipped and the focus shifted, and we were holding back their jammer like nobody's business. Like, it's not like we were slacking during any minute of the bout leading up to that point, but watching from the sidelines, I felt like all of a sudden, it was ON, and the amount of difficulty for the Damas' jammers there at the end just shot up to eleven. It was MAGIC.

If our home team season could be thought of as a three-game series in baseball, then I guess you could say that the Psychos have taken the series. And come July 20th, we will be GOING FOR THE SWEEP. Bring your brooms, friends. 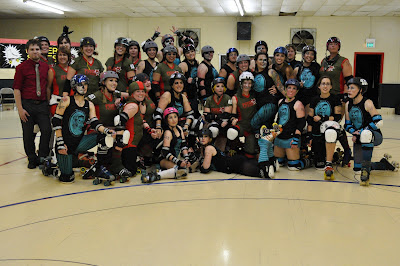