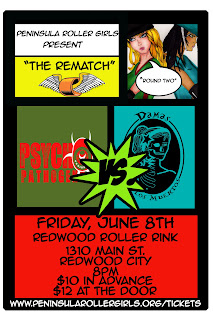 This time, I'm not so nervous. It's not that I'm super confident that we'll win this - on the contrary, I expect it to be a much harder fight than the first bout - but now, I know what to expect and what we're capable of.

We're the small but mighty team. We're not the ones who strut our stuff or trash-talk others; instead, we bring our swagger to the jammer line and we let our game speak for itself.