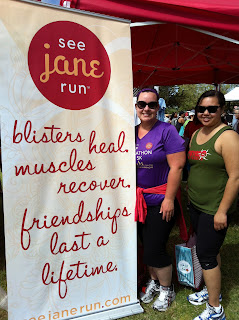 Today's race was a PR for me. I know 40:28 isn't impressive for a lot of people, but for me, it was the fastest and strongest I've ever gone. It was also important for my friend Becca, as this race last year was her very first race ever, and she's come a really long way since then too.

It was a beautiful, sunny day, and the temperature was just right for a run, although I did end up having to hold my jacket in my hand after the first mile. I don't think I've ever had a 5k go so quickly in my life. I was consistently keeping a faster pace than I ever used to, AND I barely stopped. I felt so proud of myself.

We talked to a woman in line who is this, like, SUPER athlete, though she's in her 50's or 60's, and I think we just got talked into doing the SJR sprint triathlon. In 2013, I mean. Yeah, that's next on our list after a full marathon.