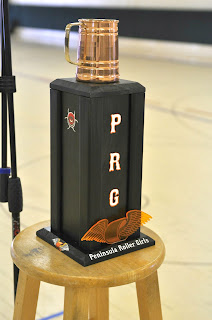 I have to say, I don't know where to begin with this blog post, because leading up to it, this last bout has kind of been on the backburner for me. It's like, while I couldn't avoid being painfully aware that this day was coming - the final showdown! -  at the same time, I had run two huge races in basically the span of a week, and then a few days ago, I woke up with a severe cold that is only just starting to go away today. And then literally the night before the bout, Jolie came down with a fever, so needless to say, my mind has been engaged elsewhere for the last couple of weeks. 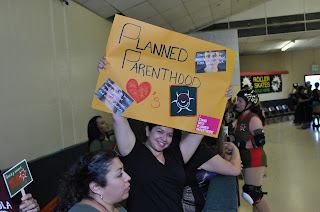 But as they say, the show must go on! With so much on the line, I wouldn't dare let down my team.

Not only was this a winner-take-all championship bout, but our two teams were also playing for a good cause. The winning team would have proceeds donated to the charity of their choice - we chose Planned Parenthood Mar Monte.

I personally voted for PP when the Psychos were trying to decide on a charity not just because of what they've done for women's health, but also for what they represent in the fight for women's reproductive choices. I am staunchly pro-choice, and Planned Parenthood has been on the forefront of giving women healthy, safe, affordable reproductive options for decades. Of course, this also means that they have been in the crosshairs of many who do not believe that women should have the right to decide what to do with their own bodies, and if skating my ass off, healthy or sick is how I can help support them, then dammit, that's what I will do!

It was unbelievably hot. We were sweating just standing around waiting for the rink doors to open so we could set up. Between the heat and all the nose-blowing I did in the car on the way to Redwood City, my makeup was just threatening to slide off my face. (It actually never did - it stayed on perfectly the entire bout. I will never doubt again!)

I was still sick, overheated, hungry, poorly-rested, poorly-hydrated, and (IMO) under-prepared. (I hadn't skated since Sunday, and had pretty much only been skating about once a week for the past few weeks.) I would not call myself someone who has "swag" in general, but I was definitely not feeling it before the bout. I knew the Damas had been improving at a steady rate since the first bout, and that, with the trophy on the line, they would be going all-out. The first two bouts didn't matter anymore - as far as the title of "champion" was concerned, it was anyone's game. I did not feel that I had any hope of matching my previous performances - my goal was just to focus, hang on, and hopefully not let everyone down. 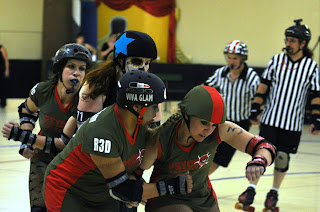 As predicted, it was a fight from the start. This time, the Damas led for the first handful of jams. It's never a good idea to be a scoreboard-watcher, because that can just drive you crazy, but I have to admit that I was eyeing it rather obsessively. But we settled down, and we got to work. We caught up and eventually finished the first half with a 50-point lead.


I was feeling terribly worn down, so I was quite happy when Carl told us that he would start giving some of the newer skaters on our team more playing time in the second half (since we had a comfortable cushion). My fatigue was getting to the point of impacting my effectiveness, so I was glad to sit out two or three jams in a row and save up the energy to go in and rock it.

I did the best I could, which is all you can ask of anyone, right? I wasn't as fast as I could be, I wasn't as sharp as I could be, but I think I did a good job containing the other jammer at various points throughout the bout, working with my pack, and laying down some hits. (During our short warm-up skate at halftime, No Filter paid me a great compliment - "Dude, YOU LAID ME OUT, Viva!") The most important part to me was working with my pack - I knew that I did not have it in me to be a superstar! all by myself (even on a good day, it's dubious), and my only chance at accomplishing anything good at this point was to find my teammates and work together - more often than not, we were successful.

When the bloody battle was over and the dust had cleared, the final score was 136-104 in our favor. The Psychos had swept the season! *cue Queen* 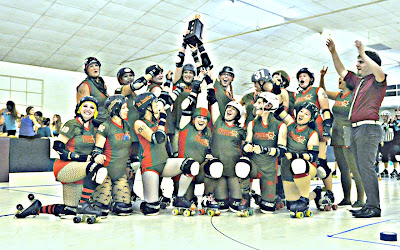 The larger victory at hand belongs to our league as a whole. Our first successful home team season! A full complement of volunteers/support staff! A fan base that includes not just our family and friends, but  even random people in the area who've heard about us! A bootcamp full of new recruits rarin' to go! And respect and acknowledgment from others in the derby community - that's a big thing too. I think that a lot of people are excited about us and excited for us, and that is such a thrilling feeling :)

I'm not going to say "This is it! We've made it!" because there's so much more to come... but I will say that we are gaining momentum, and for a new-ish league, that's a wonderful thing. 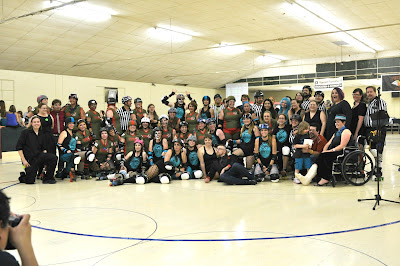 Now... onwards and upwards! I'm off to Vegas for Rollercon, and then interleague season begins...