July 07, 2012
The Dirty Dozen and Half-Dozen endurance challenge is basically a race where you run as much as you can in either 12 or 6 hours (respectively). The course is set up as a 5k loop, and you run as many loops as you feel like. You don't have to run the full time if you don't want to - lots of people stopped to eat, change gear, hydrate, or even sleep.


The story is that I originally signed up for the first 10k, then decided I wanted to do the 6-hour challenge instead. However, I then decided that since I'd already paid the fee for the 10k, I might as well run that one too and get my shirt/medal for it, since I would still be running during the hours of 11am-1pm anyway. So that's how I ended up running two different races on the same day. So, even though technically my 6-hour distance isn't very much, I did also run an additional 10k before 1pm.


So... the race was held at Point Pinole Regional County Park, right next to the bay, which meant that it was both beautiful and freezing at 6:30am, when I first arrived:


The 6hr was going to start pretty soon, so I needed to pick up my bib and timing chip. Other runners were setting up tents, laying down tarp, setting up lawn chairs, etc. I set up at a picnic table (with my friends Lindsay, Kymi, and her friend Dominique). Ugh, dirt and bugs. Definitely not my thing. 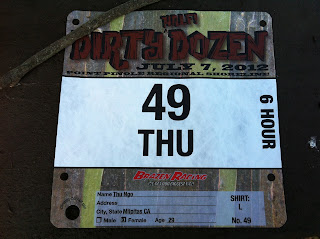 People who do the 12hr or 6hr get a really awesome zip hoodie, as opposed to just a tshirt: 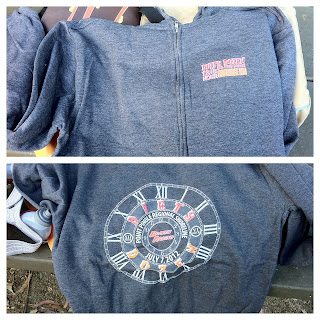 And it was SO nice to have this, as it would still be super cold later on. (After I'd finished my first run, and was sitting at the table freezing because I'd been sweaty and the wind was really strong, I threw it on over my jacket, over my sleeved tech tee.)

It was not an easy run for me - I run on flat concrete, so my not-trail shoes and my under-developed leg muscles were less than adequately prepared for the hills and the loose gravel that made up a large chunk of the race course.

I pushed on and felt pretty good the first loop. I took a short break at our table to Gu up and stretch a little, before heading back out for loop 2.

(At this point, I would like to take this opportunity to say that the race course loop was actually 3.37 miles, instead of 3.1, which is what a 5k actually is. I was SO perplexed why the race felt so long, and my 5k time was unusually slow. Yeah, that was why - it was a quarter of a mile longer.)

I didn't want to overdo it, since I would have a 10k later (and a half-marathon next week), so I took it easy and decided to enjoy the scenery, which was beautiful. 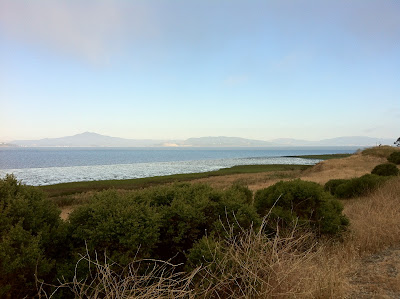 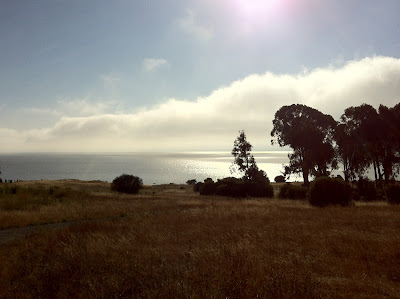 I even saw two deer run slightly around me in close proximity. (No, I didn't get pics of that.)

Here's my DD medal! Yes, that's a bottle opener in the center - it's like, "YEAH, crack one open! You just spent HOURS on your feet!"(I don't drink though.) It's also padded around the outside circumference on the backside, so you can use it as a coaster. BADASS. 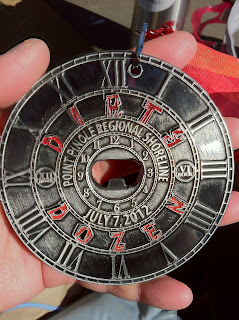 I got some food and sports drink, and picked up my 10k race stuff: 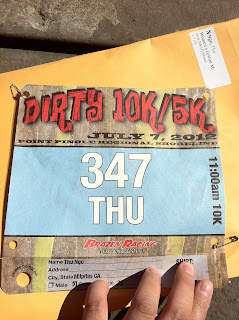 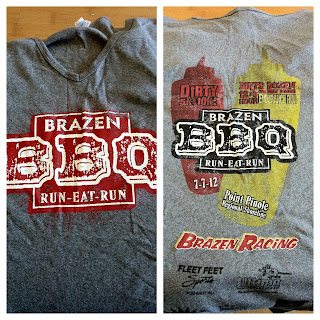 The 10k (which was actually 6.74mi, not 6.2) was hard. It was hard because I was already tired, and it was warmer/sunnier out than it was at 7am. I tried to run as much as I could, but it wasn't very much :/ There were 5k runners who finished before I did. My calves were spasming a bit, and my hamstring felt like lead, and I didn't want to risk injuring myself (I've got too much riding on my legs right now!), so I had to just content myself with walking it. I finished in 1:52. Blah.

What made me feel better, though, is that the medal for this year was a piece of poop:

This gives a total of 16.84 miles in about 4:30, which is seriously the greatest distance I've ever covered in a single day, ever. (Because my longest distance until now has been a half-marathon.) I was proud that I was still standing. Maybe I will live to see another day. Maybe my hamstring and I will be on speaking terms once again.

I want to take this opportunity to say that Brazen Racing (the local race company who put this on) is FRICKIN' AMAZING. This was my first time running any of their races, and I was duly impressed with it. Normally, race experiences don't particularly stand out to me in terms of, like, hospitality - I usually run, get my shirt, and go home. The volunteers are always cool (well, except a few at the Divas HM), but that's not necessarily a credit to the racing company, so much as a credit to the volunteers themselves.

But I have to say that Brazen really took good care of their runners today. I don't know if all their races are like this, but I will be running this one again for sure. I mean, it was a small race to begin with, which really made it awesome, because when there are too many people, it sometimes sucks (because I hate people), but I love that they strategically planned the course so that there were porta-potties at the halfway point; the race course instructions were clearly explained to us; the bib pickup was orderly; EVERYONE was so nice and friendly; and the aid stations didn't just have sports drink and water, but also FOOD, like Oreos, skittles, bagels,  mini cinnamon rolls, chips, potatoes, Gu, and even stuff Paleo people like me can eat, like oranges and bananas. It was QUITE the spread for aid stations. I've never seen that much food at an aid station in all my (running) life.

And IT GOT BETTER... I know they said they'd have hot food, but I assumed it would be like other races where they have food companies come in for post-race, and you buy a $12 plate of teriyaki or something. I did not realize that they would have FIVE tables of food and drink for all their runners (for free!). They had pizza, chili, soup, fajitas, burgers, hot dogs (and toppings), potato salad, Tabbouleh (I dunno), TONS of fresh fruit, a ginormous amount of V8 Mango Smoothie (they were urging people to take CASES home), and an entire frickin' CARB TABLE, which I've so named because it was full of bagels, muffins, cookies, chocolate cake, cheesecake, other cake!, and an assorted amount of spreads that included NUTELLA. I s---- you not - they had NUTELLA for us!!

And it was all GOOD. I've had post-race food that was basically blah and cheap-y, and totally mass-produced. But this food was totally delicious. And the fruit was being freshly cut by someone the entire time - it was not like eating old bananas that have been slowly turning brown in the sun while I was running the race. I don't know if I was overly tired and hungry, but I swear to you that every single piece of fruit I had was just utterly amazing and sweet.

So major, major props to Brazen Racing. I will be checking them out again in the future.

Overall, it was a fun race, and I think it will be a good benchmark for the future to see how I've improved as a runner. Next year, I want to do 20 miles!