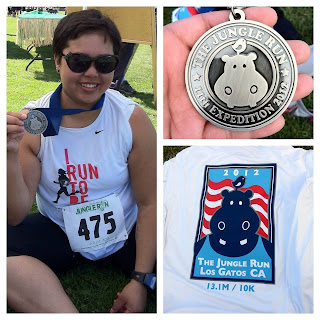 I signed up for the Jungle Run solely because it's exactly on the trail where I normally run on Sundays, and figured I might as well just run a little extra (I was actually scheduled for 8 miles today) and get some bling and aid stations out of it. It was just supposed to be a one-off "fun run" (I put that in quotes because only someone like me would consider 13 miles a fun run, right?).

And I don't feel too beat up. My feet have been feeling blistery since last week's Dirty Dozen, but I feel great otherwise. I have to chalk this up to my better diet and just being more active in general - previously, even when I've tried to WALK a half-marathon (not even running a little bit), my body would start giving up around mile 8, and my legs would start feeling like lead. I was tired today, but I felt strong pretty much all the way through. (My throat was feeling scratchy though.)

And the best part of course is that I did it side by side with two wonderful friends: 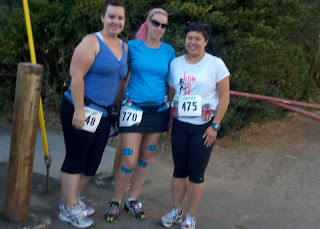 Next up: we have a bout this Friday (our last home bout of the season), then I'm going to Rollercon the Tuesday after that, and then I have The Color Run in Sacramento on August 4th. I'm SUPER excited for that one.

The next two halves I'm signed up for are pretty hilly, so I'm waiting for the next Tinkerbell to try to go under THREE. That's my next goal.