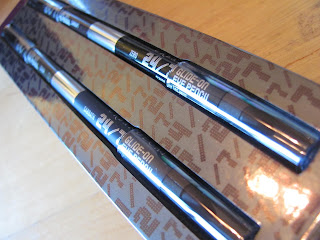 As I'm sure you can tell by now, I'm a FIEND for Urban Decay's eye pencils, and it is part of my life's mission to obsessively collect all their different shades, because I totally love them.

UD's Holiday 2012 collection is definitely giving me lots to be excited about. In addition to their Ocho Loco pencil set (which I squee'd over in this post), they also released this new Double-Ended Eye Pencil Set, which contains two tried-and-trues, one almost-exclusive shade (Corrupt, which previously appeared in the UD15 eye pencil collection), and one brand-new shade called Sabbath, as well as one of their fantabulous eye pencil sharpeners (which I own multiples of, by the way): 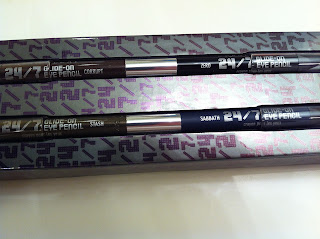 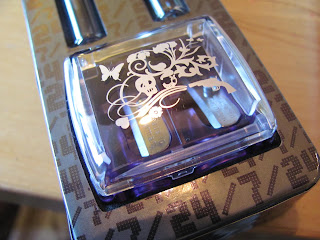 Sabbath is a dark, dark, almost-black navy blue, no doubt inspired by the corresponding shade from The Black Palette. 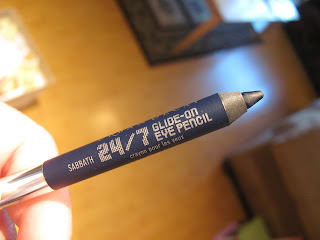 Where it differed (IMHO) from its eye shadow counterpart, however, was that it seemed pretty straight-up matte to me when I swatched it. The eye shadow has glitter, but the pencil was matte.


As you can see, it's not shimmery and it has no glitter. It's really quite nice - I kind of think of it as the "Perversion" of navy blue. That is to say, it's the super-darkest navy blue I've ever seen, just like Perversion is the super-darkest black I've ever seen. And very pigmented - after I swatched the above samples, I just kind of scrubbed them off the back of my hand with a tissue, and Sabbath seemed to leave a stain. (I guess that's the thing with mattes.)

Sabbath is pretty kickass. I kinda want to pair this with eye shadows like Woodstock or Asphyxia. If you've been waiting for a dark matte navy, then this is your best bet, as it's obviously darker and matte-r than the other two navy options (and I dare include the Binge Ink for Eyes as well). I have no clue about whether this will become part of the permanent line or whether Urban Decay will just decide to whisk it out every now and then to get some more money excite their fans, so I would pick one of these up now if you really want it.

(Especially since there's free shipping on UD's holiday stuff until 9/15 and if you've ordered anything from them recently, you probably got a postcard with a UD sticker and a $5 off coupon.)