September 19, 2012
Obviously this is called the Vice Palette for a reason - it was DESIGNED for those of us whose vice is eye shadow. 20 brand-new exclusive shades, available for a limited time only - OBVIOUSLY I bought this right at midnight when it was released. I mean, DUH. And OBVIOUSLY I spent a bunch of time taking pictures of the palette instead of getting ready for Back to School Night tonight:

The slightly rubbery purple surface of the palette is the same that they used for the tiny little face case that came out a few years ago. It's nice to touch like a James Bond villain stroking his cat. It's nice and sturdy, the lid stands up on its own so you can see the awesome full-sized mirror inside, and it comes with a double-ended brush - UD's eye shadow brush is okay (not my favorite), but their crease brush is totally awesome.

So I wanted to get some quick swatches out there - I know lots of blogs have done swatches already, but hey, it's great to see these shadows against different skin tones, right? 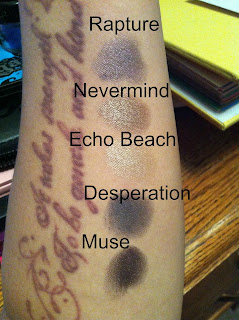 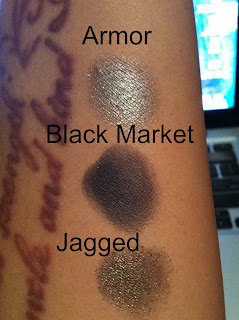 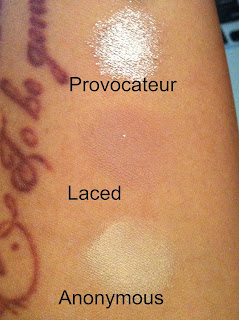 You'll notice there are two missing from the photos above - Chaos and Noise are THE two standout colors in this palette, and the burning questions have been about how Noise compares to Woodstock and how Chaos compares to Sugarpill's similar colors. So, let's take a look. 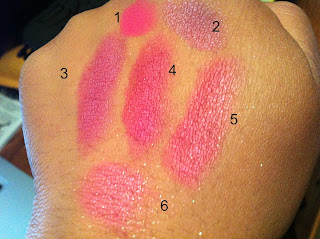 Sorry I don't take better photos, but you can kind of see subtle differences between the three Urban Decay shades - Junkshow has some purple in it, Noise has a bit more red, and Woodstock (which is the hardest for me to distinguish in this photo, but it was really obvious in real life) is just PINK. And obviously none of the Sugarpill colors are dupes at all. 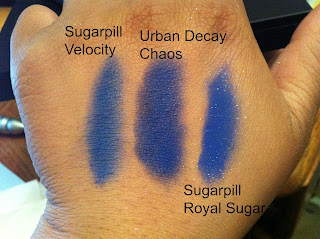 Chaos is a deeper blue than the two Sugarpill shades - Velocity was a bit sheerer (I really had to pack it on here), and Royal Sugar is probably the most vibrant of the three (and it has teal glitter!)

So there you have it! The Vice Palette. I'm super excited about this, and can't wait to try out some looks with it. I will of course tag every entry using one of these shadows with "Vice palette."