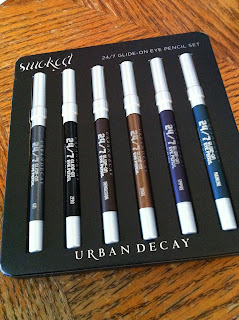 UD's Smoked pencil set, like the Smoked palette, is a nice, solid set of shades that are extremely versatile and, thanks to its size, extremely portable. When I first got the Smoked palette and started using it (I brought it with me to Rollercon in July), I came to the conclusion that I actually thought it was a better travel palette than the Naked palettes, by virtue of the fact that it had a small selection of colors. (One cannot simply live on neutrals alone!) I think that the Smoked pencil set offers the same versatility and portability as its palette counterpart, and I think that these are great shades to have on hand wherever you go.

I'm not going to bother swatching Zero, because black eyeliner is black eyeliner (though it is a very good one, and was my favorite until UD released Perversion, which is far darker), but here are Empire, Uzi, and Demolition: 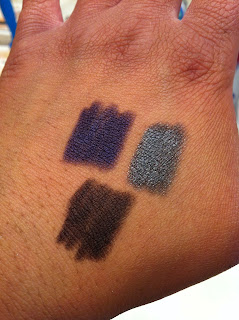 Demolition is a not-uncommon brown (and available as part of the permanent range), but Uzi has only been released in a couple sets, and Empire was only released as part of a double-ended pencil with Uzi. Empire has been one of my favorites since I first got it, because I love purple, and because UD doesn't have any other dark purple eye pencils that look like this. Uzi is great - darker and more sparkly than Gunmetal. It reminds me a bit of UD's Mercury shadow pencil.

This set includes two brand-new shades ("Ah ha!" you say, "THAT'S why you bought this pencil set!"), Mainline and Smog. I'm actually surprised that there hasn't been an eye pencil called Smog before, since the Smog e/s has been around for ages. It's a coppery brown. Mainline is a dark, blackened teal. Both colors are pretty unique among the 24/7 line - see here: 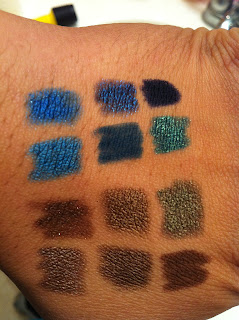 Mainline really doesn't look like any of the other shades, aside from being blackened like Sabbath, but even then, you wouldn't mistake the two. Smog is much more golden than Hustle, and not at all greeny like Stash.

So there you have it. Is it worth the price? Depends. I think it's awesome to get two new, unique shades (Mainline and Smog) as well as backups of two limited-availability shades that I love (Empire and Uzi). When all is said and done, I only ended up with two pencils that I really didn't need (Demolition and especially Zero), but if you're NOT like me and you don't already own every single UD eye pencil ever released (of course you do, right?), then you'd probably be able to find a use for those two as well. So four out of the six shades are not permanently available, and the two that are are really great basic staples for any makeup collection.

Another solid set from Urban Decay!