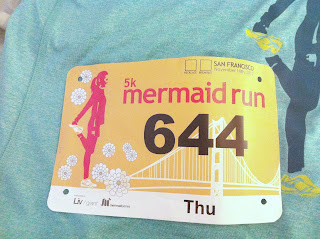 Before I start, let me just say this: I am NOT built for San Francisco. I have about five heart attacks just trying to drive through the city. Driving up steep hills makes me fear for my life. While we still made it to the race on time and in one piece, it was still a little panic-inducing when we missed some turns and ended up having to drive all the way across the Golden Gate Bridge and then back. (Oh well, I've really only been across it a couple of times, and it was a beautiful morning to be there.)

I was joined by Becca and my friend/leaguemate Amanda for a fun, easy 5k. I've done a Mermaid Series race before - they are totally chill, all-female, and very empowering. They have AWESOME, unique participant shirts and cute finisher necklaces. It would be like if the Nike Women's Marathon offered shorter distances and didn't charge you a week and a half's worth of grocery money.

I figured this would be a great way to get myself re-motivated after taking it easy for a couple weeks to recover from the marathon. Also, it kills me that one of my goals for before I turn 30 is to run a 5k, and while I completed the goal by MOSTLY running a 5k, I still hadn't run one in its entirety since 2005, when I was running more regularly. So I wanted to meet that goal.

Luckily it was sunny out, after being wet all week (down here in Milpitas, at least), but it was freeeezing. We parked at the end of the marina parking lot OPPOSITE the start line, so we had a long way to walk in the cold. That's the first time I've ever seriously considered running a warm up, because I really wanted to literally warm up. I knew I didn't want my jacket with me, but I regretted leaving my gloves as well - it wasn't until about a mile into the race that I could start to feel my fingers again.

The only problem with races like these is that there are a LOT of race newbies. Which is fine - I fully support newbies! - except that a lot of these women clearly had not been briefed on race etiquette. If there is one thing that totally gets my goat, it's people not staying to the right when they are going a slower pace. Runners to the left, walkers to the RIGHT. I hate having to use extra energy and muscle power to get around clumps of women four abreast, leisurely taking up the entire width of the race path with their flailing arms and tutus. (And of course they don't hear you coming because they've got earbuds in and/or are Facebooking pictures of themselves ON THE RACE COURSE.) It's inconsiderate and entitled, is what it is - I'm glad you're happy and excited to be doing your first 5k, but BE CONSIDERATE. I know it's supposed to be a fun run, and far too short to waste so much time griping, but you HAVE to be considerate of other runners. Especially runners who are, you know, running and have time goals and stuff.

And for that matter, if you're slower, line up where you belong, so faster people don't have to pass you. But then again, I totally underestimated my speed, because we took this one FAST. I ran as hard as I dared, and I did not stop.

I'm very proud of myself, although now I feel like the pressure is on for my next 5k, whenever that might be.