December 22, 2012
How else would I kick off my two-week winter break than by staying up late to reorganize my makeup?

It all started when I went on a trip to Ulta (because I had a major coupon to use before Monday), and as I was standing around in the Urban Decay aisle, I started swatching their random shadows on my hand to create my own palette. (I wasn't actually going to buy shadows to create my own palette, because you know how I feel about their palette system, but I figured since I had all these shades at home, I could just use a Z-Palette.)

This inspired me to go home and depot my Vice palette and my Naked Basics palette. I like to have my makeup organized a certain way, and since I already have all my other UD shadows organized into Z-Palettes by color family, it kinda kills me to still have two separate palettes all by themselves, not arranged how I want them to be.

So, I used my boxcutter to pry out the plastic tray where all the pans were, and then I popped them onto a cookie sheet and put them in the oven at 250 for just a few minutes.

This is enough to melt the glue a little and allow me to pry out the pans themselves and affix labels to the back with their names on them. The Vice palette pans were VERY easy to pop out, which probably meant that they weren't glued in very well, but the Basics palette was - OMG - almost impossible, and had to go back in the oven quite a few times. I had a couple sort-of casualties - I totally broke my Walk of Shame from the Naked Basics, but I wasn't too worried, since I actually have the single-shadow version of that one, and I also broke (to a lesser extent) Chaos from the Vice palette, which I don't have another pan of, but it's VERY similar to a couple Sugarpill shadows, so I am not worried about using it up and running out. 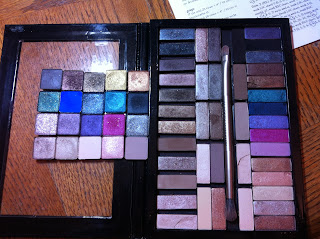 I decided to omit "Foxy" because it was already available in Naked 2, and I added my Naked Basics colors to my current Pro Palette containing the other two Nakeds and the 15th Anniversary palette. (Basically, it's all the skinny pans.) While I would throw ALL my Z-Palettes into my bag in case of a fire, this particular one is absolutely my go-to. My Holy Grail. I travel with this one. (And it doesn't go in the checked luggage, either!!!) If you think about the fact that each skinny pan is a full-sized shadow (weight-wise), there is over $750 worth of eyeshadows in just this one palette alone. (Not saying I paid that much for them all - there's a reason why palettes are often a smarter choice than buying individual shadows.)

The Vice palette shadows got incorporated into my larger stash. Which is QUITE large. 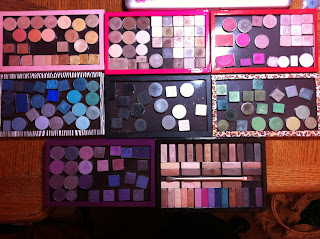 A closer look at each palette. No, I can't identify all of the shadows by sight. (But lots of them, yes!)

I know what you're thinking: "Why on EARTH would anyone need so much eyeshadow?" Well, sir, to you, I only have this to say: 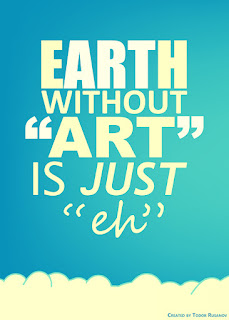