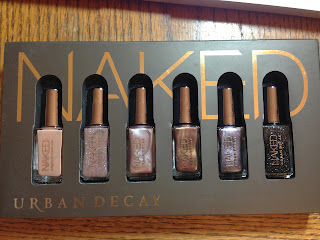 I'm not usually someone who gets excited about nail polish (especially UD nail polish, which I'm not particularly impressed with after buying the Apocalyptic nail set), but since I'm a big fan of the Naked collection and I adore the idea of nail polish neutrals, I wanted to give this one a try. It is available exclusively through Sephora at the moment, though I'm sure it will find its way to UD's website at some point.

I haven't tested this for wear, but if it's like the Apocalyptic set, then I don't have high hopes in that department. It's okay - someone who knits, Crossfits, and chases a three-year-old around doesn't usually expect much from nail polish anyway. But I was pleased to find that these polishes were generally better pigmented than the other set, and they applied pretty well. 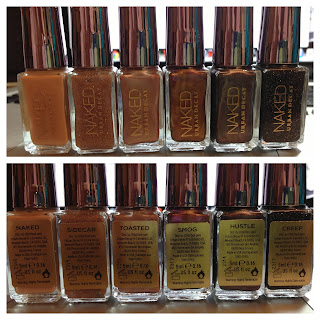 - Naked was surprising. It's a nude that leans slightly peachy (at least, in my room lighting =P) and has a cream finish. Looking at it in the bottle, I would've thought that it would apply thin and milky, but I was surprised to see it was pretty much opaque in one thick-ish coat. (I'm no nail polish expert, and I kinda just glop it on.) It's REALLY pretty :)

- Sidecar is beige in the bottle, but went on rather clear in one coat. Like its eyeshadow counterpart, it has a ton of micro glitter, and the glitter went on pretty thick.

- Toasted is a shimmery nude, slightly on the cool side. It was mostly opaque in two coats. It wouldn't be my first choice for a nail color, but it does look really pretty.

- Smog was the one I was most excited about. It's just a regular dark-ish bronze as an eye shadow, but the nail polish is like a dark rose bronze. A pinkish copper? It looks GREAT. Metallic finish.

- Hustle as a nail polish goes on more purpley than it does as an eye shadow, and I LOVE it. (You know me and purples!) It's a gorgeous color, in my opinion.

- Creep was the only one I was actually disappointed in. It's a black with silver micro glitter, and it went on pretty sheer - I was hoping for a more creamy, inky black. Even with two coats it wasn't as dark as I would like, but it's still pretty.

So, I pretty much liked all of them except one. Again, I haven't tested them for wear, and again, I'm no nail polish aficionado - I just kinda put them on and put on a topcoat, because I don't have the time or the patience to put on all this other stuff and REALLY do my nails. (You can see that I don't put much priority on my hands in my photos below.) I'm pretty sure my nail color will start chipping off tomorrow. But... I don't really care. I don't have high expectations for nail polish, like I said.

Here are some photos! 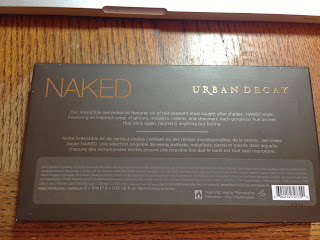