"We're beaten and blown by the wind, trampled in dust" 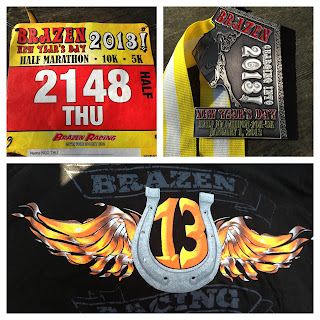 No time like the present! I decided to kick off my 13 13s in '13 quest right off the bat with the New Year's Day Half Marathon.

This one was a tough one - not as hard as Summit Rock, but pretty comparable to (maybe harder than?) Morgan Hill. The difficult parts (hills) were brutal and long, while the easy parts were WHEEEEEE LOOK AT ME GO.

I wonder if Brazen has other races at this location (Lake Chabot) at another point during the year, because I would be interested in trying this course again in warmer weather. It was FREEZING at the start. (Of course it was - it's January, after all.) The wind was like a knife in my face. At some point during the race, I realized that the waistband of my pants had slipped down a little, and that there was a small part of my stomach showing, but I'd had NO idea, because it was so cold that I couldn't feel anything. (Like, I'd lost feeling in that small patch of stomach from the cold.) The other "seasonal" obstacle for me was all the MUD - thick, slippery, be-careful-or-you-could-twist-an-ankle, grabbing-ahold-of-your-feet-with-a-sucking-sound mud. I was NOT comfortable running through it, which was unfortunate, because a lot of the muddy areas happened to occur on the flat parts that I actually could run. Going up or down a muddy hill proved to be a little scary as well.

I did this one all alone - it's been a long time since I've done a race completely by myself. I think sometimes it's important to see how well you fare when you only have yourself to rely on to push yourself on. (That's not to say that I completely chose to do this alone - I would've welcomed a race buddy if anyone was available.) It's a different experience when the only voice in your head for over three hours is just your own, and I think that while I am fairly comfortable alone my thoughts, I do tend to rely on external motivation and other people to push me through. Today was a nice little "reset," some me-time to start the new year. I didn't have any crazy epiphanies or spiritual discoveries, but I did learn that, even all alone, I am stronger than I think I am.

Brazen, as always, never disappoints. The volunteers are always friendly, the aid stations always have good snacks, and after I finally finished (in 3:31:46), the Its-It I devoured was probably the best one I'd ever had in my life. (ALL post-race food is the best food ever.)

One down, twelve to go. Next stop: DISNEYLAND.