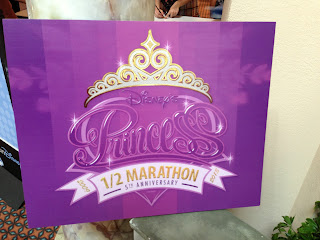 I want adventure in the great wide somewhere
I want it more than I can tell
And for once it might be grand to have someone understand
I want so much more than they've got planned...

- Beauty and the Beast

This weekend I ran the Disney Princesses Half Marathon in Orlando! This was not my first out-of-state race, although, at the time that I ran in Oregon, I was living there for college, so this is my first MAJOR destination race. Accompanied by my bestie, my daughter, and my parents, we journeyed out to Walt Disney World in Florida for a few days of sun and fun.

When we originally registered for the race, one of the questions during the registration process was to pick your favorite Disney princess - mine is Belle, from Beauty and the Beast. I've always liked her best because she's kind of a bookworm and isn't ready to settle for what her life has given her - she wants something more, and I appreciate that at no point does she seem to express a desire to get married; she doesn't feel that she needs a man in order to be complete (although she does eventually get one anyway... we'll do a Disney critique another time...)

I thought this was a just-for-fun question at the time, but lo and behold, when I went to the expo to pick up my bib, this is what I got: 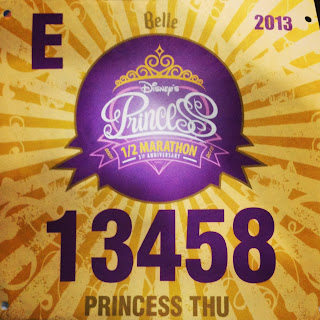 My bib goes along with my princess :)

To add to my Belle theme, I also bought a Belle tank top from Raw Threads and a gold sparkly skirt. I refuse to do an actual costume because running 13.1 miles in non-running clothing just seems like madness to me. (And I think I've already made my feelings clear about tutus.)

Becca's favorite princess is Aurora from Sleeping Beauty, so her bib was pink. 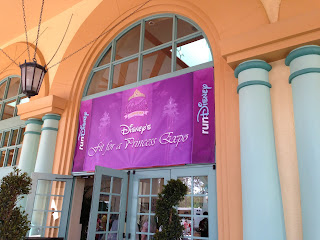 If the Expo were a sign of things to come, then I should've expected the race to be a bit maddening, because the Expo was kind of poorly organized (and the race ended up being so as well).  Considering how smoothly the Tinkerbell HM has gone - yes, I know there were about 10,000 fewer runners for Tinkerbell, but seriously? This is the Princesses FIFTH anniversary, and WDW has an abundance of space that the entire city of Anaheim cannot match. The bib pickup was easy enough, but the goodie bag pickup and vendor area were total madness - I guess it's not a Disney experience unless you're waiting in lines for 2 hours, right? (But seriously - at the Tinkerbell race, we were in and out in less than 45 minutes with plenty of time to browse the booths.) Yep, about an hour to pick up my race shirt, which SHOULD have gone much faster because we all had pre-chosen our sizes and there were already separate lines set up for each size, and the size-exchange table was separate, so this should NOT have taken that long, but they had employees holding us up for no really good reason.

And THEN, GOD knows why, they had a teeny, TINY "official merch" area. The official merch area for Tinkerbell was WIDE OPEN and HUGE, but this one was totally fenced off and squished and I had to wait in a long line just to get IN, and then another long line to pay (and while I was in line to pay, there were rabid runners reaching all around my head because THEY JUST HAD TO HAVE FIVE CAR MAGNETS AND A COFFEE MUG, GODDAMMIT). I would have foregone that booth, except that the one thing I wanted was a Disney Coast to Coast shirt. 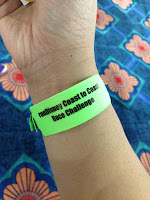 The Disney Coast to Coast challenge stipulates that you must complete one Disneyland race and one WDW race in the same calendar year (marathon or half marathon). This was my entire purpose for coming to Florida - to fulfill this challenge. At bib pickup, they gave me this NIFTY green bracelet, which I would then exchange at the end of the race for a shiny Coast to Coast medal.

But I also wanted a shirt because, contrary to popular belief, people don't always think it's cool to wear your running bling around all the time, so I braved the lines and the crowds just so I could get one. (And you know how I am about people and personal space.)

So, I'll go into vacation details in another post sometime, but we had a ton of fun hitting the different parks (especially Jolie!), and soon it was go-time.

So, again, the race was RIDICULOUSLY organized. Considering the amount of space WDW has at their disposal, and the fact that they've had four previous years of experience to build upon, this should've gone off without a hitch, but such as it was, the flow of traffic into the park, the confusion about where to go, and the ridiculous amounts of walking it took to get from the drop-off area to the start corral were just... yeah, ridiculous. Not to mention the madness that was involved with my parents coming to pick us up and being made to leave the area and circle around and NO ONE seemed to know anything about what to tell us or them about where to go to find us. Come on, Disney, you guys are one of the biggest corporations in the WORLD. GET IT RIGHT, SON.

I knew this race was going to be brutal. Full disclosure - I haven't run a lick since Tinkerbell last month. I took time off to recover and to rest my knee, which I must have tweaked somehow during that race, and then I just couldn't get motivated to do anything. Now, I am luckily in good enough shape in general that I knew I would still finish on time and everything, but this past week was just throwing tons of hurdles my way healthwise, both before and throughout the trip; add to that, Florida's unfamiliar climate (HOT AND HUMID), and what you get is... lots of walking and limping. Injury + feeling ill + undertrained + new climate = SUCKS.

I tried my best. Becca and I stuck to intervals for a while before my knee and my right quads got the best of me. At that point (about mile 8), Becca continued on without me and I did the best I could - I ran until it hurt (which wasn't very long) and walked until it stopped hurting, and eventually finished. I made myself run the finish chute, and that ended up being a terrible idea because then I was REALLY in pain after I crossed the finish line (3:20:57, official). But hey, I did cross the finish line.

Not my best, but not my worst. I knew it was going to be a "fun run" for me anyway, and that my only goal would be to record an official finish time. That I did, and while I was grimacing on the outside, I was happy to collect both my finishers medal and my Coast to Coast medal. 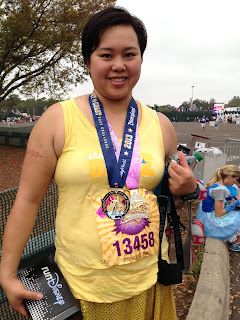 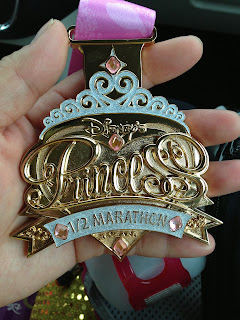 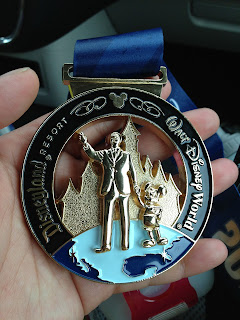 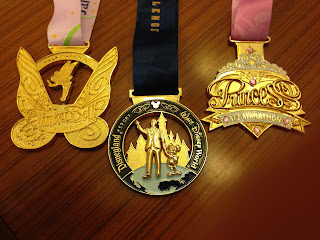 Yes, I TOTALLY brought my Tinkerbell medal to Florida so I could photograph all three together.