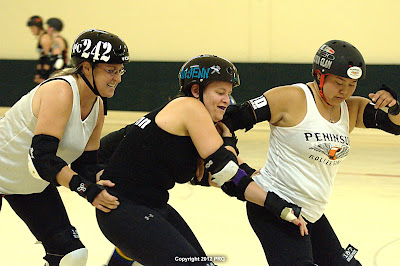 I was a bit vague in my previous entry when I mentioned that I had retired. I'm going to attempt to explain myself here.

After the Psychos won the championship in July, I took 6 weeks off on personal LOA to take care of my non-derby life (much of which had been sorely neglected as I focused on home team season), and once I was gone, it was hard to come back. Not just physically, but emotionally - you become acutely aware of the fact that the world does in fact keep spinning without you, and you miss so much - not just the big important stuff like strategy and official business, but also little stuff like inside jokes - and it's hard as hell to get caught up. It's hard as hell to re-form the bonds that were weakened by your absence.

And that's the thing - it would've been easy enough for me to catch up on the official derby stuff. I considered myself a knowledgeable enough and skilled enough skater that I could've caught up on that just fine. The bonds, though - I'm not good at bonding and socializing. I mean, there were certain individuals within the league whom I held very dear, but for the most part, I was always kind of a loner at practices and have never been good at shooting the s*** and going drinking after practice and generally, you know, talking to people. I'm not outgoing. I'm totally an introvert and can be painfully awkward in large-group social situations, and that's a large part of what derby is. I think my connections to people were weak in the first place and as my absence prolonged, those connections all but dissolved.

And of course this is all on me. I cannot - and DO NOT - reasonably expect people to reach out to me when I haven't been reaching out either. People are not going to make an effort with someone who doesn't show up. I totally get that. It doesn't make me any less lonely... but I don't want you to think that I blame anyone.

So... yeah, there was my increasing self-isolation. Add to that some internal turmoil within the league (that I don't care to discuss), some large changes in the general world of roller derby (like a hefty change in rules that I haven't yet taken the time to learn), and my growing interest in other equally time-consuming sports (CrossFit and running)... and I had a glaringly obvious answer. It was time for me to say goodbye.

Well, friend, it's rough. I miss it. I absolutely do. I don't regret my decision, because I'm absolutely not in a place in my life right now where I have the bandwidth to support a hobby that requires such a hefty commitment (of time, of emotions, of brain power, of physical power) and I don't doubt that at this point, right now, I'd be more of a hindrance to any derby league than a positive contributor.

But all the same, I miss it. I miss the actual sport itself - the strategy, the physicality, and the aggression.

But I also miss my teammates. The camaraderie, the inside jokes.

I feel a bit lost. I allowed roller derby to define me for so long (well, three years isn't THAT long, but for me, that's a long time) that I'm not entirely sure what I am right now. I mean, it was literally an identity for me - I even had another NAME that people called me. And now that identity is no more. Or, well, it would be disingenuous to hang onto a derby identity when there's no derby to back it up.

I don't know if I'll NEVER skate competitively again. I don't like to say never. I know some people would be really happy to see me come back, either to PRG or to other leagues. But it's not something I can consider right now. I've got a lot of things I need to do and sort out. I'm no good to anyone if I don't take care of myself first, and that's what I need to do.

But I really do miss roller derby, I gotta say.