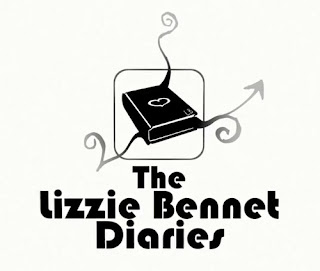 The Lizzie Bennet Diaries is more than just a show to me.

I will never forget when I FIRST heard about LBD - suddenly, there it was on my Facebook feed. One of my friends from middle school had posted a link and said, "You had me at Bing Lee."

What? What IS this?

All I could glean was that it was a modernization of my favorite book EVER, Pride and Prejudice, and that it was vlog-style. I knew what the word "vlog" meant, but I had know idea that it was such a THING. Vlogs, to me, were videos posted by rather narcissistic people who were too lazy to actually write blogs or who just didn't have good writing skills. (Yeah, look at me go, Judgey McJudgerson.) I didn't know that it was practically an industry and a genre all on its own, and that web video in general was its own subcategory of entertainment with its own "celebrities" and such. LBD opened my eyes to this whole new world, just when I was needing it most, because regular network tv (with the exception of a few shows) no longer offered anything worthwhile to me.

And the transmedia element - I had a twitter account (as well as a Pinterest), but I barely used it. I couldn't understand the appeal, when all my friends were on Facebook and I could write much LONGER updates there. (Can you tell writing is my preferred method of communication?) I read the LBD character tweets, but it was a while before I finally "followed" them all on Twitter, and BOOM - this whole other aspect of the story opened up to me. Once I had caught up on all the videos (my first live episode was #63, back in November) and started following the characters (and even the cast) on Twitter, the LBD universe became REAL. When I was catching up, the tweets were just screenshots on a website - but now, live, they were happening in real time. Characters were having conversations with each other before my very eyes. Watching the train-wreck-that-I-thought-would-be on New Year's Eve when Lydia was in Vegas? Stress-inducing, because even though I KNEW she would hook up with Wickham, I still held out hoping she would exercise some common sense. (Ha!) San Francisco day? The most exciting day ever as we watched Lizzie's day with the Darcy siblings unfold (and Darcy has hipster glasses!! Oh my god!!) It was a day filled with hope as we saw something developing between them (that would carry over to the remaining videos at Pemberley, which of course is where Elizabeth starts to see Darcy in a different light). The Day All the Bad Stuff Happened - I watched the horror unfold on my screen as fans discovered THE SCANDAL and saw Charlotte trying to warn Lizzie, but Lizzie was unable to receive messages because of her broken phone. And then we had to wait until the following day to see Lizzie find out the horrible news - in the middle of Darcy trying to ask her out on a date.

God. You just had to be there.

LBD isn't just a show - it's a universe, one that I feel really lucky to have been a part of. LBD introduced me to new friends (fans AND cast members) and reconnected me to old friends. We all SQUEED together when Lizzie and Darcy finally got together last week. And we are all going to mourn after the last episode airs today.

I'm sad that it's over, but this is where the book stops. It's even where the BBC miniseries stops, right? So we shouldn't really be sad. There's a reason why this story, 200 years old, has prevailed, and now LBD can throw themselves in the mix as yet another version of this amazing novel.

To the cast, crew, writers, and fellow fans, thanks for making these past few months exciting and memorable. For giving me something to look forward to (for making Mondays AWESOME). For reawakening my passion for my favorite book in the whole world. I'm looking forward to seeing you again soon, in another universe.