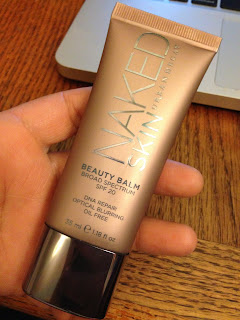 So, having recently gone to Florida, I decided that would be a great time to really try out UD's BB cream. I had brought my Missha BB with me as well, but it's actually really thick, and in the Florida heat and humidity, I wanted something thinner, with less coverage. I had a couple deluxe sample tubes of UD's so I used those instead.

And you know what? I ended up LOVING it. It definitely didn't provide as much coverage, but sometimes the Missha cream goes on like a foundation and I just don't want that much. The UD cream smooths over my complexion just enough.

So, my normal beauty routine with this BB cream has been to moisturize, apply the cream, and then apply some light concealer. (I recently purchased UD's now-discontinued Surreal Skin creamy concealer, and while I still love BeneFit's Boi-ing for heavier coverage, most days, I just want to look a little more... normal. It's too bad that Surreal Skin has been discontinued because it turns out that I really love it.) And also whatever eye makeup.

And it looks great! I think I've found my winning everyday combination. It reduces my redness but doesn't make me look overly made-up. My skin isn't too greasy by the end of the day, even though I haven't set it with powder or used setting spray. It's just right. It doesn't take me forever to blend it out exactly right either, which is the number one reason why I don't wear a full face of foundation every day.

So here is a comparison for you. Feel free to click and ENLARGE MY FACE.

From left to right:
- Clean-faced me. Just moisturizer.
- Above + BB cream + concealer
- All of the above + UD's Naked Skin foundation. No powder

There's a subtle difference between 1 and 2, but it's there. I'm less red and a little less rough. And you can definitely see how much more coverage the foundation gives. Sure, I'd like to look like #3 all the time, but let's be honest - I just don't have that much time every morning, and while I would stop just at the BB cream + concealer, if I'm wearing full foundation, I need to finish it out with powder and blush and stuff, so... yeah, don't have time.

However, I DID have time this morning, so here's the finished look: 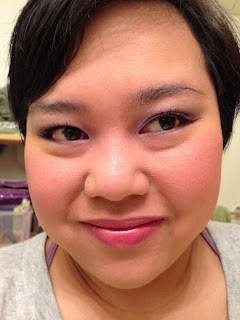 Eyes:
- UDPP
- Maybelline Color Tattoo cream e/s in Too Cool as a base (it's the white one)
- UD Omen all over the lid (available as a single)
- UD Half Truth in the crease (from the 15th Anniversary palette)
- UD Naked to blend out the crease
- UD Venus on the browbone (from the Naked Basics palette)
- UD eye pencil in Rock Star along the upper lash line
- UD eye pencil in Mushroom along the lower lash line
- Maybelline The Rocket mascara

Geez. No wonder I never have enough time to do a full face. Look how many damn products I had to use! :)