March 23, 2013
Disclaimer: This product was self-purchased.

(Whaaaaatever, FCC. NO company is giving ME anything for free.) 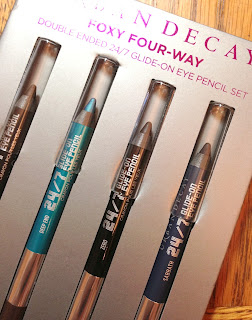 Urban Decay's Foxy Four-Way set comes with four double-ended pencils for a total of eight shades - four of which are permanent (Zero, Perversion, Demolition, and Stash), three of which are braaaaand new (Deep End, Delinquent, and Muse), and one limited-availability shade (Sabbath, which I'm super happy to have a backup of, now, because I LOVE IT).

You've seen all the other ones on my blog before, so let's get to the three new colors: 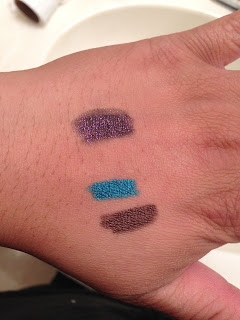 Delinquent is a blackened purple with a lighter purple sparkle. As you'll see in my comparison photo below, it is quite different from the UD shadow pencil of the same name, which is a lighter purple. Both share the same purple sparkle though (which my poor photo-taking skills could not convey) - the base colors are just different.

Muse is a slightly coppery brown. (I feel like UD has SO many browns!) 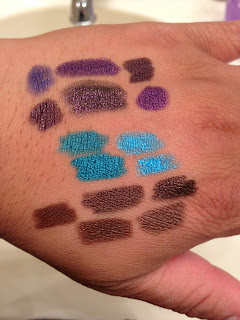 These are obviously not all the purples, blues, and browns that Urban Decay makes - I just grabbed the ones in my drawer which I thought (from memory) would be most similar.

Delinquent isn't exactly like any of the others - it's got the same sparkle as the Delinquent shadow pencil, as I said above, but the base is different. It's more similar to Rockstar and Crash, but they are more brown-based rather than being black-based. Lust and Psy Sister look nothing like it.

Deep End is actually quite similar to Flipside, and it took me a second to figure out the difference - Flipside is a big greener, while Deep End has more blue. Deep End is a deeper color and has more green than Crash or Electric. I'd say, if you have Flipside and don't need a ton of teal in your life, then you are probably good sticking with that.

Muse isn't exactly like the other browns, but you know... it's brown :) Whiskey is more matte, and both Whiskey and Bourbon are more red-based. Muse is darker, less golden than Hustle, but not as Dark as Demolition.

So, there you go :) Three new colors to add to my arsenal. Of course, I have no doubt of the quality and wear of UD's eye pencils, and you know how I feel about them (HOLY GRAIL).

If you're thinking about buying this set, I would DO IT NOW since UD is offering free shipping on orders $25 and over until 3/31.