April 26, 2013
Okay - I got a chance to swatch the new UD pencils I got against ones I already have (current and discontinued), and some of the results were surprising! 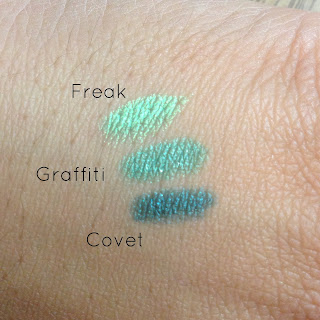 UD has other greens, of course, but I didn't even bother swatching them because they were nowhere near the same sort of green as Freak. Graffiti is the closest one and it's not even close. 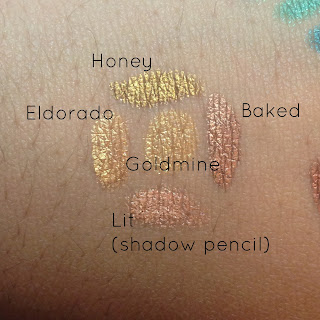 Goldmine is really similar to Eldorado, but Goldmine is more yellow with a hint of sparkle, while Eldorado is more metallic. None of the other ones come close. (Honey is still my favorite though.) 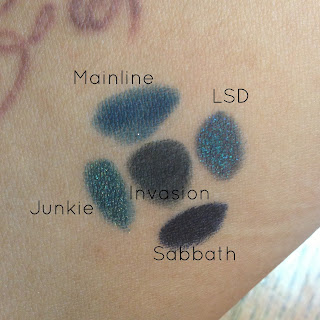 I thought Invasion would look like Mainline, but it's definitely blacker and greener. It looks like the base for LSD, but again, greener. 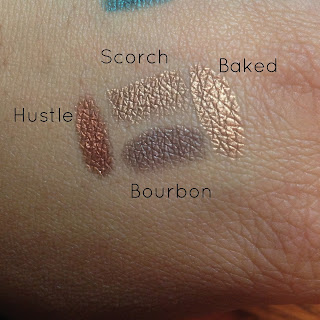 I thought Scorch would be the easiest to match. Baked is pretty similar, but Scorch is more brown than Baked is. It's probably similar enough that you don't need both. All the other browns are definite browns, and you saw all the other golds above. 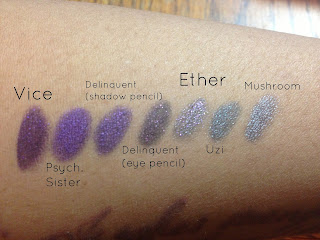 I decided to put Vice and Ether in the same swatch photo because they are both purpley. Vice is a deeper, more red-based purple than the other two that you can see here (and those were the two that I thought would come the closest to matching Vice.) Ether looks like Delinquent but with a lighter base and lighter-purple sparkles. Ether's base is actually REALLY REALLY light - lighter than Mushroom, probably, if you're just doing a couple passes. After a few passes, you can start to make it look like Uzi, but you'd have to really layer it on. It is amazingly beautiful though - I'm going to have to figure out how to work that into an eye look.

So there you have it. If you're thinking about getting one (or some, or all) of these particular shades, you can see how they stack up against other colors in UD's past and present.

I'll probably get the remaining six shades a couple at a time. You can expect that as soon as I get new ones, I will swatch them for you too :)