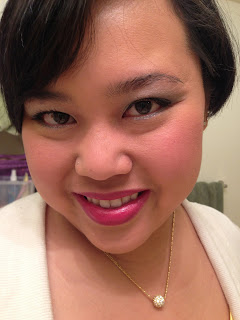 - UDPP
- Sugarpill Chromalust loose shadow in Tiara all over the lid
- Urban Decay e/s Gunmetal in the crease and a little in the outer corner
- Urban Decay e/s Venus (from Naked Basics) to blend out/highlight
- NYX Roll-On Eye Shimmer in Platinum dabbed onto the center of the lid (p
- Stila Stay All Day liquid liner in black along the upper lash line
- Urban Decay eye pencil in Mushroom along the lower lash line, topped with Mushroom e/s
- Maybelline The Rocket mascara

Funny thing - I had initially put on OCC Lip Tar in Super NSFW and then changed my mind, but of course, if you know OCC Lip Tar, you know that one does not simply wipe off OCC Lip Tar with a tissue. So I had some bright red residue still on my lips, and then I put on Urban Decay lipstick in Buzzkill, which resulted in the lip look you see here. I don't remember the last time I wore Buzzkill by itself, so I have no idea if it's that bright on its own :)