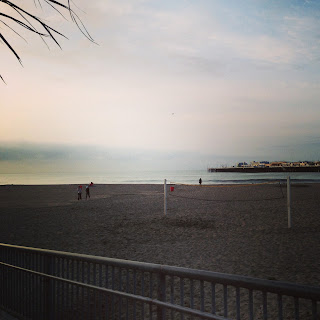 The lesson of the day is "mental toughness."

So, I've never driven to Santa Cruz by myself. I think someone must have told me a long time ago, when I was first learning how to drive and venturing outside of my little corner of the South Bay, that the drive to Santa Cruz was winding and tricky, and accidents happen easily because 17 is winding and people take the turns too fast, etc. So ever since then, I've avoided driving myself down there. Which hasn't been a big deal - I rarely have cause to visit, and the couple of times I've gone, other people have driven.

Over time, it got built up in my head to be this huge THING. Like traveling to Mordor or something. (Yes, I am more than a little ridiculous.)

But I really wanted to do this race. My grand plan was to have Jimmy drive me, because he is an excellent driver, but at the last minute, I changed my mind, because I didn't want to drag him out to the race and make him wait three hours for me all by himself. It just wouldn't be fair. So, I bit the bullet and drove myself.

I admit, I was a nervous. I made sure I had plenty of time to get there, because I fully intended on taking those turns at grandma speed, clenching my steering wheel with two hands the entire time. I told myself to toughen up and stop being such a scared little kid. It ended up being not nearly as bad as I thought - seriously, what was I so afraid of? - and I got there and found parking with little trouble. (In other news, because it was metered parking and I only had a twenty on me, I now have a nice little stockpile of dollar coins. :/) 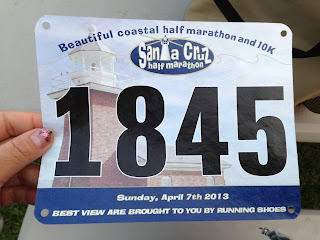 It was a good thing that I gave myself extra time, because I was parked waaaaay down the street from where the start line was. After I picked up my bib and did my usual pre-race "suiting up," I glanced quickly around the area to find the sweat check.

SO. Yeah. Great. My car was too far away for me to drop off my bag and get back in time for my race start, and I was not willing to just stash my bag behind a random bush and hope for the best. (It's my running bag. Even though I had all my valuables tucked into my belts, I was not willing to lose this bag. I am extraordinarily attached to this bag, and its one purpose in life is to hold my running things.) And they were not willing to keep an eye on it for me, so... my only option, pretty much, was to carry it.

So... another good panic. I was standing there, two minutes before my start, trying not to freak out about carrying my huge bag with me for the entire race - it's a tote bag, not even a backpack or a messenger that would be easier to cinch close to my body, so it had to sit on my shoulder. Again, I had to tell myself to toughen up and deal - people are running with strollers and pace signs; a tote bag should be nothing in comparison. I could either let it be an excuse, or I could make it a bragging point. (I did get a few people along the way saying to me, "WOW, I can't believe you've been carrying that the whole time. Did you train with it?", to which I sheepishly replied, "Uh, I didn't know there wouldn't be a sweat check." What? They didn't say there would be one, but they didn't say there wouldn't be one either, and I STILL maintain that it was NOT an unreasonable assumption to make on my part.)

Off I went. I probably took the first two miles a little too fast, because everything felt difficult after that. The bag bothered me mentally more than it did physically. In general, I had a really hard time mentally this entire race. Physically I felt fine, aside from my head being a little throbby for the last two miles due to all the sun - there was direct sunlight almost the entire course, and I've never dealt well with running in the heat. My legs, though, felt the strongest they've ever been. (*waves* Hi CrossFit!! You're the best.) Usually, no matter how many walk breaks I take, my legs start getting that lead feeling once I hit double digits. Today? I felt fine the entire way. I probably could've done another couple of miles on top of the race, and my legs would've been fine.

But my head was a different story. (Mentally, not physically.)

After I finished the race, I walked over to the wharf and sat down to drink some water and catch my breath. The ocean is really great for contemplating life.

In all honesty, I'm not sure I deserve this medal. Even though I finished under 3 hours like I had wanted to, the truth is that I phoned it in really early. I must be a faster runner than I think, because I was bailing on my running intervals early almost every time after the first two miles - my brain was just not getting me through and I was letting myself give up way too easily. Come to think of it, I possibly could have PRed (or come really close to it) if I had pushed myself. I'm a lot stronger than I was in January, physically. But mentally, I still have a lot of strengthening to do.

Next up and on deck: the Western Pacific HM and the Mermaid East Bay HM. They are on back-to-back weekends at the beginning of May, and both are at the exact same place. I have a little time now to work on getting stronger in all ways.

And now, some pictures. 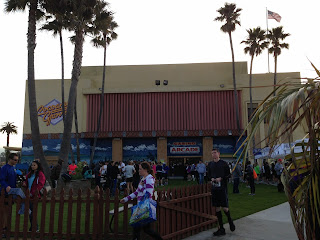 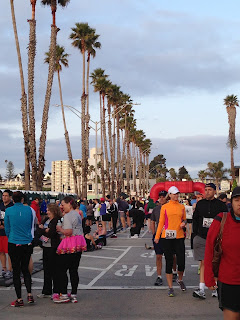 Gorgeous, gorgeous views along the way - 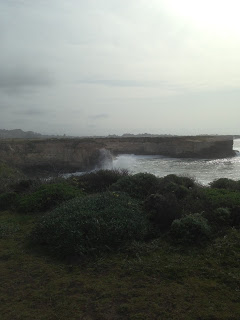 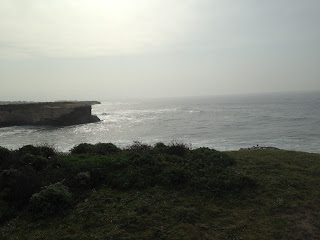 Post-race, from the wharf - 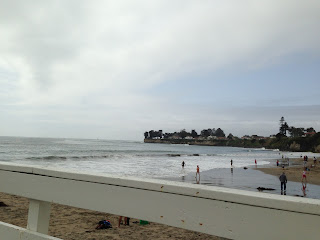 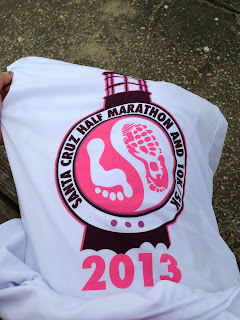 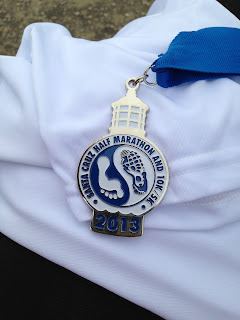 I would do this race again. I think I WILL do it again. Santa Cruz, we got off on the wrong foot. Let me make it up to you next year.

Here is my stupid tote bag, for reference. It wasn't this full for most of the race, though (nor did I have that bottle of water). 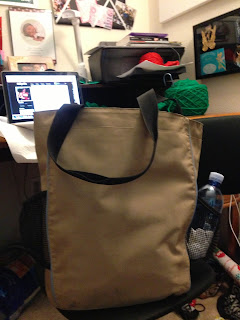