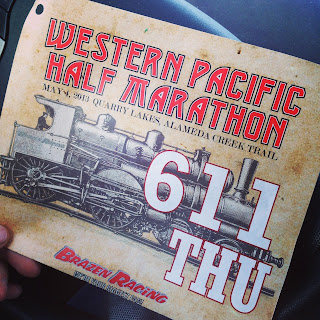 Half marathon number 7 on the year - in the books!

This one was kind of a doozy, and quite unexpectedly so. I've run at Quarry Lakes before (a Mermaid 5k, and as I later realized, the Union City 10k also uses a large portion of the same trail that isn't inside the park area), so I was expecting a fast, flat race. It was definitely flat, and it would've been fast, except I absolutely did not take into consideration the fact that there is very little shade along the entire course. And with the spike in heat we've been experiencing lately, this race (which I had secretly been hoping to PR) became just totally brutal.

In fact, here's how much I did NOT consider the weather: 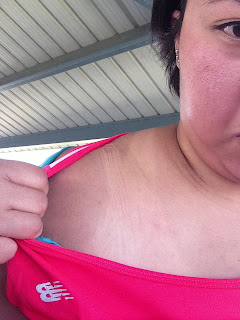 I don't think I've ever worn sunscreen for a race before (I know, I know!), and today was no exception. I'm actually not really burnt - no pain or anything, though my cheeks are a bright shade of pink. But I was definitely concerned for myself out there.

Even when I wasn't in the sun, it was still super warm, and I have never done well in the heat. I've always preferred colder weather. My one goal for this race was to run the first five miles, but with the relentless sun, I ended up needing to stop a lot. I pushed pretty hard for the first six miles, took it a little easier for the next three miles, and then the last four miles were just torture. I remember looking across the lake at where the finish line was and whining to myself, "I can see you but you're soooo farrrrr!" I was dumping cups of water on my head at the aid tents because I was overheating so much.

I finished in 2:59:02. I was feeling pretty defeated for the last half mile, but there was nothing I could do about the heat.

On the plus side, my legs feel fine. Strong, even. Again, many thanks to Paleo and CrossFit for making me durable.

Next week, I am running the Mermaid Half Marathon East Bay in the exact same place. The course isn't exactly the same, but it's similar enough. So, Quarry Lakes, we will meet again next week and you will be vanquished. I would very much like to finish closer to 2:50 next week. We'll see.

(And, yeah, no more back-to-back weekends after this, I think.) 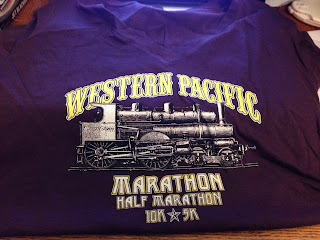 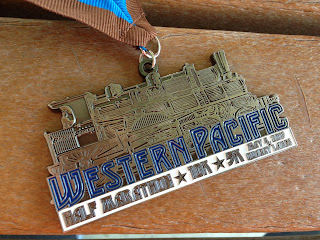