We like to joke around that my superpower is that I'm really good at infecting people with my enthusiasm for stuff and convincing them to do it too, and as my bestest-bestie-since-high-school, Rebecca probably gets it the worst from me. Whatever thing I'm obsessed with - hobbies, books, tv shows, etc - I inevitably get her into it too. She even wrote in our senior year yearbook, "You have enriched my life with the new experiences you pushed me (sometimes unwillingly) into."

Running turned out to be no exception. Becca herself will tell you that she never thought she could ever be a runner, that she just didn't have it in her, but somehow, some way, I managed to convince her in 2010 to sign up for the 2011 SJR 5k with me (with the promise of champagne and chocolate). It wasn't her very, very first race, but it was the first one that she was going to race. And it definitely wasn't my first one, but it was my first race in a long time that I was actually going to race, after having spent the previous few years doing races casually and spending time focusing on my newly-born daughter.

So, we ran SJR 2011 together. And we had a great time, and I was so proud of my best friend. And from there, she really threw herself into running, as did I. Later that year, she completed her very first half marathon, and it was difficult and grueling for her, but she did it.

The following June (2012), we ran the SJR Alameda 5k again, the anniversary of her first race, and we totally rocked it:


And then that following October, we both completed a full marathon together. We spent all that time training together, and we crossed the finish line side by side, crying happy tears.

Tomorrow is the 2013 SJR Alameda event, and I won't be there (because I have the honor of being asked to read names at graduation, so, teacher duty calls), but Becca will be there, running the half marathon this time with her friend, who is a newer runner, just like she was two years ago. And so for both of us, this race has come to symbolize friendships, new beginnings, and accomplishment. Here on this San Francisco Bay shoreline, we both found that spark that helped change our lives.

Good luck to Becca, her friend Tracie, and all the other Janes running tomorrow, whether they are taking their first steps or their millionth ones. Have a great race. 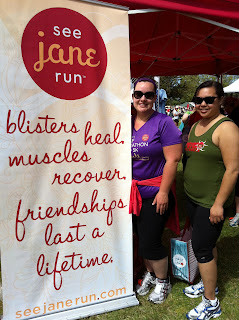